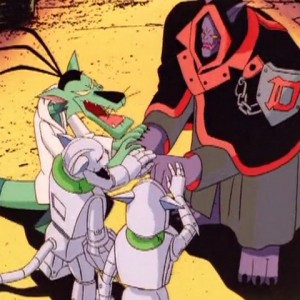 Four of Megakat’s most notorious villains join forces in an “invincible alliance of evil”.  Dark Kat, Dr. Viper and Mac ‘n Molly of the Metallikats come together to fight against their common enemy, the SWAT Kats.  While Viper joined willingly with Dark Kat, the Metallikats were forced into the group via neuroscramblers Dark Kat placed around their necks which he uses to control the robotic pair.