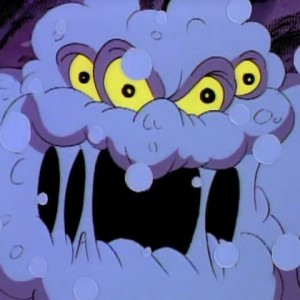 They appear to be giant bacteria. - Dr. N. Zyme

The giant bacteria were monstrous purple germ creatures created by Dr. Viper when he mutated his fellow evildoer Morbulus. Following Morbulus’ horrific mutation, he was used by Dr. Viper in his attempt to raid Megakat Biochemical Labs. The practically indestructible monster would divide into more of itself whenever hit with conventional weaponry, and because Morbulus literally had eyes in the back of his head, the original monster had four eyes. Whenever the giant bacteria split, the eyes would be divided up among the individual monsters. In all, there ended up being three monsters, one with two eyes and two with one eye each.

After stopping off at a farm to eat a cow (and presumably the farmer, too), the four-eyed giant bacteria proceeded into Megakat City, where it rudely interrupted the opening ceremony of Manx Municipal Park. Callie Briggs tried to kill the monster by running into with Mayor Manx’s limo, but this only succeeded in causing it to divide into two monsters, each with two eyes. The SWAT Kats and Commander Feral on the scene, and against the advice of both Miss Briggs and the vigilantes, Feral fired a missile at one of the bacteria. The end result was three monsters to deal with. 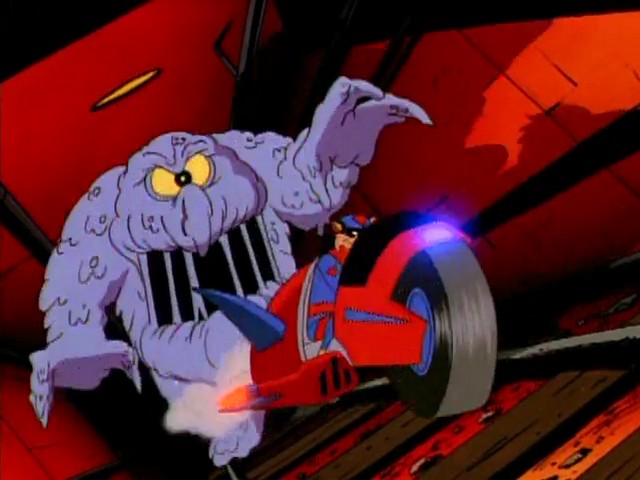 Two of the bacteria monsters proceed to Megakat Biochemical, while the third wandered into the subway. Razor followed it on the Cyclotron, but is too late to stop it from eating an entire subway train full of innocent passengers. Chasing Razor down the tunnel, the bacteria came into contact with the third rail of the train tracks and was electrocuted, melting into a lifeless puddle of brown sludge. Realizing that electricity was the giant bacteria’s weakness, Razor returned to T-Bone in the Turbokat.

The other two giant bacteria had by this time already reached Megakat Biochemical and breached its defenses, but the SWAT Kats arrived and quickly dispose of one with a Megavolt Missile. Antibiotics used by Dr. N. Zyme failed against the remaining monster, as Dr. Viper had made the germs immune to antibodies. The final creature was then led underneath some powerlines by the SWAT Kats. A vibrating blade that shot out of the Turbokat’s wing cut the powerlines, and the final giant bacteria was fried when the downed lines fall right on top of it.