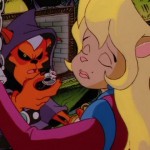 Razor: So that’s why no oil tankers have been able to reach Megakat City.

T-Bone: Yeah, long lines at the gas pump, all because of some oil-suckin’ eel.

Razor: Well the suck stops here! This should pry him away. Bingo! The Pincher Missile works every time!

T-Bone: Every time but today, sure-shot! Incoming! Razor, talk to me buddy! Are you hit?

T-Bone: Well, now that you’ve got that off your chest, what about the crude dude?

Razor: Time to cut him off. Buzz-Saw Missiles, away! I’ve got an idea, but it means going head to head with motormouth.

T-Bone: Then I guess it’s up to old T-Bone to keep us from becoming a flyin’ pin cushion!

T-Bone: Aw, crud. We just had the Turbokat washed!

Crewman: Yeah, thanks to the SWAT Kats!

Razor: Yeah, but we’re leaving empty-handed. Thanks to that oil-guzzler, I’ve only got one missile left.

T-Bone: Piece of cake! We’ll reload back at the hangar. And get that scaly souvinier off our wing. Now that’s what I call a sudden storm!

Razor: If I didn’t know better, I’d say it was one of the Pastmaster’s time vortices.

T-Bone: Then let’s avoid it, shall we? Aw, crud! Why do you always have to be right, Razor?

Razor: This is one time I wish I wasn’t!

Pastmaster: Listen to my spellbook’s rhymes, come to me from mythic times. For I am the Pastmaster! Megalith City and its queen will soon fall before me!

Razor: Not one of your smoothest landings, hotshot.

Razor: Basically. With a little work, the Turbokat will fly again.

T-Bone: But fly where? Looks like we’ve gone in one era and out the other.

Razor: Well, from the looks of that sword, I’d say we’ve landed in the Dark Ages. Definitely Dark Ages!

T-Bone: The woods are crawlin’ with these guys!

Razor: Maybe the Glovatrix will even the odds!

Callista: What magic is this?

Callista: I am Callista, queen of Megalith City, and you are the enemy!

Razor: And they called us sorcerers!

T-Bone: Listen, we’re not who you think!

Callista: Silence! Finish them off!

Callista: Destroy them! Strike a blow against the Pastmaster!

T-Bone: Pastmaster?! We’re not workin’ for that little creep!

Tabor: The Dragon Sword! My Queen, could be the one foretold?

Callista: The warrior who pulls the sword from the stone shall be the hero who saves us from the Pastmaster.

T-Bone: Hey, I loosened it up for him!

Razor: I told you we were the good guys.

Tabor: Now we will find out if the legend is true!

Razor: I wonder why everyone took off in such a hurry…

Pastmaster: The SWAT Kats? What are those pests from the future doing in my past? Alas, disrupting the time stream is so unpredictable. No matter. My cyclops will destroy them!

Pastmaster: Welcome to my Dark Ages, SWAT Kats! It will be your final resting place!

T-Bone and Razor: The Pastmaster!

Pastmaster: Just keeping an eye on you! You can run, but you cannot hide!

T-Bone: Why hide when we can ride?

Pastmaster: My cyclops will pound you into eternity!

Razor: Put the pedal to the metal, T-Bone!

T-Bone: We’re already at maximum overdrive! Unless we live dangerously!

Tabor: It is quiet now, my Queen. Perhaps the monster has been vanquished.

Pastmaster: Queen Callista, how fortunate we should meet again.

Callista: Leep your foul creature away from me, Pastmaster!

Pastmaster: Your magic is no match for my cyclops, Callista! Have you reconsidered my offer?

Pastmaster: Then I will destroy you and your precious Megalith City!

T-Bone: Don’t fire ‘till you see the white of his eye!

Pastmaster: No! My cyclops! The SWAT Kats may have won this battle, but the past holds countless creatures of evil for me to summon! And one way or another, Queen Callista will be mine!

Callista: You are indeed the hero foretold by the legend of the Dragon Sword.

Tabor: Uh, do you have names?

Callista: Then Sir Razor and Sir T-Bone, you must return with us to Megalith City. There we will find some measure of safety from the evil Pastmaster.

T-Bone: We took care of the Pastmaster once, your highness. Old T-Bone gaurantees we can do it again.

Razor: If we can get the Turbokat back into the air.

Callista: My finest blacksmiths will help you repair your flying machine.

T-Bone: Blacksmiths? All the modern conveniences…

Callista: Come, it is time I prepare a hero’s feast in your honor.

T-Bone: But what he’s trying to say is nobody’s gonna start hammerin’ on the Turbokat without our supervision.

Razor: Affirmitive. A six-pack of milk will do us just fine.

Tabor: No feast, my Queen?

Callista: “Six-pack?” Bring goblets of milk and some stew. I will dine here with Sir Razor.

Pastmaster: She will be my bride, and there’s nothing those SWAT Kats can do about it.

T-Bone: Uh, what I wouldn’t give for a good welding torch.

Razor: Maybe you should just use some of this stew. Whoa, this has some afterburn. Whoo, hoo!

Callista: Pepper stew is a Megalith City speciality. Does it not please you?

T-Bone: Hope this Dark Age stuff holds. I wish I had some aero-space alloys.

Razor: Yeah. Wish we could go back to the hangar for some missiles, too.

Callista: Hangar? Is that the name of your city, Sir Razor?

Razor: Nah, that’s just where we “hang out,” heh. We’re from Megakat City, far in the future.

Callista: My city has no future. The Pastmaster will destroy Megalith City if I do not marry him.

Razor: Not while the SWAT Kats are around.

Callista: Seeing you with the sword has given me hope. For the first time in a long time I feel I can rest easier. Goodnight, Sir Razor.

T-Bone: “Goodnight, my Queen!” Come here, buddy. I’ve got a hot forge I’d like you to meet.

Pastmaster: You won’t be needing that amulet, Callista. I have something even better for you! A wedding ring!

T-Bone and Razor: The Queen!

Pastmaster: Tommorrow at sunrise you will become my bride!

T-Bone: I told you not to take this heros tuff too seriously, ‘Sir’ Razor.

Razor: We can’t let her marry the Pastmaster! Sunrise is only a couple of hours away. The Turbokat has got to be operational by then.

T-Bone: Whatever happened to “Thanks for the backup?”

Razor: Oh, and thanks for the backup, buddy!

Pastmaster: So, my Queen, are you ready to be my wife?

Callista: Never! I will never marry an evil little gnome like you!

Pastmaster: Alas, then watch your city be turned into rubble!

Callista: Where is Sir Razor? Perhaps I have put too much faith in the legend.

Pastmaster: Well, Queen Callista, have you changed your mind?

Callista: It appears I must. To save my city.

Pastmaster: I knew you’d come around.

T-Bone: The Turbokat is back!

Razor: Yeah, sure closed his eye in a hurry!

Callista: The SWAT Kats are vanquishing your monsters! The wedding is off, Pastmaster!

Razor: Bring me in close, T-Bone.

T-Bone Yeah, we gave that one-eye the one-two.

Razor: Now to get the Queen back from the Pastmaster.

T-Bone: Looks like we won’t have far to go.

Razor: Crud! That little weasel knows we can’t attack him without endangering the Queen!

Pastmaster: Nothing can withstand my dragon’s breath!

Razor: And I’m gonna save the Queen. Head into that cloud bank!

Callista: My thanks, Sir Razor.

Razor: Don’t thank me yet, that dragon’s still breathing down our necks!

Pastmaster: Alas, now you both must perish!

T-Bone: Razor, I can’t near ya! He’s gonna fry you for sure!

T-Bone: Roger, but–but you’re the sure-shot, not me!

Razor: Don’t wait all day, buddy. You’ve only got on chance! Take your best shot!

Razor: We’re right in the line of fire!

Callista: I hope I’m enough of a wizard to send you back to your own time.

T-Bone: Me too. I don’t wanna spend the rest of my nine lives eatin’ pepper stew.

Callista: You’re sweet as well as brave, Sir Razor. That’s for saving me and Megalith City. But the legend was wrong. There were two heroes. Quickly, you must return to your flying machine.

T-Bone: Looks like the Dark Ages are gonna be ancient history.

Callista: Listen to the spellbook’s rhymes, send them back to modern times. Farewell, my heroes.

Callie: SWAT Kats! Do you copy? This is an emergency!

Callie: Well it’s about time! Where have you guys been?

Callie: There’s no time! Another supertanker is being attacked off the coast!

T-Bone: We’re there! Hey, when the queen beckons we must obey! Guess old suction-mouth must’ve had a brother.

Razor: Isn’t this where we came in?

T-Bone: Affirmitive. Hey, got any of that pepper stew left?

Navigate Bride of the Pastmaster