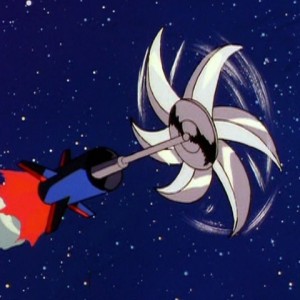 Time to cut him off. Buzz-Saw Missiles, away! - Razor

One of the SWAT Kats most frequently used air-to-air weapons, the Buzz-Saw Missile is a non-explosive, rocket-propelled projectile that contains a motorized, spinning saw-blade that expands out of a red casing.

It is easily recognized by the grinning shark decal that covers the shell.

It is most effective when used against lines, tethers, propellers and wings, though they occasionally get shot out of the sky before they reach their target, or the target proves to be too durable.

The Turbokat can rapidly fire a barrage of Buzz-Saw Missiles against a multitude of enemy targets, making it one of the jet’s most powerful attacks. The Cyclotron also carries Buzz-Saw Missiles.