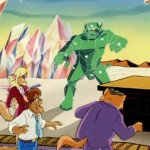 The SWAT Kats are testing some of their new missiles out in the desert.

The Slicer Missiles do fine, chopping up a trio of robot tanks, but the Banshee Missiles (which emit a high-pitched scream) fail to destroy their targets. Meanwhile, Mayor Manx and Callie pay a visit to Megakat Maximum Security Prison, and speak with the warden, Cyrus Meece, who shows them how he keeps the prison so well funded; he uses his prisoners to mine the nearby mountain range for diamonds. He then introduces them to inventor Dr. Leiter Greenbox, who has created a special mining machine, the Gemkat 6000, which Meece hopes will speed up gem production.

Up at the mines, convict Rex Shard is testing the machine, under the watchful eyes of Talon and Lem, a pair of prison guards. Unable to resist taking a few of the mined diamonds for himself, Shard tries to open the Gemkat 6000′s drill housing, but causes an explosion. When he emerges from the mine, half his body has been turned to crystal. He soon discovers that whatever he touches turns to crystal, too, when he grabs Lem. After doing the same to Talon, Shard proceeds to the prison, hoping to get at Warden Meece (and Dr. Greenbox, for what his device did to him). Meanwhile, Mayor Manx leaves the prison and heads for Megakat Springs for the Manx Invitational Golf Tournament, leaving Callie to finish up. On their way home from testing, the SWAT Kats pick up Shard’s weird signal on radar, and head over to inspect. Shard arrives at the prison, and he turns completely into a crystal being. Warden Meece calls Commander Feral on the phone, and tells him to get over there fast, and then Shard busts in.

He grabs Meece, turning him to crystal, then goes after Callie and Dr. Greenbox. The SWAT Kats arrive and hit Shard with some cement slugs, knocking him back into t he vault containing Warden Meece’s gem collection, allowing Callie and Greenbox to escape. Coming into contact with the gems causes Shard to grow bigger (and in the chaos, the crystallized Meece is knocked over and smashed by a clumsy Dr. Greenbox). The Enforcers arrive, led by Commander Feral, and join the SWAT Kats in fighting Shard. Dr. Greenbox says he might be able to revert Shard to normal if he can get back to his lab, so they jump into his jeep and head over there.

Shard decimates the Enforcers, and even damages the Turbokat (using his new ability to hurl crystal projectiles), and then he heads after Callie and Dr. Greenbox.

At Megakat Springs, the boring tournament is interrupted first when the Turbokat flies overhead, and then when Shard comes stomping onto the golf course. Feral and more Enforcers arrive, and briefly challenge Shard, until, annoyed, he turns the entire golf course (and everyone on it, including Mayor Manx) to crystal. Ann Gora, who had been reporting on the tournament, follows Shard in the Katseye News chopper. The Turbokat makes a crash-landing in the desert, and Razor begins to try and fix the damage, when Callie calls them on her communicator, telling them she is at Gemkat Labs (Dr. Greenbox’s lab), and that Greenbox is rewiring the Gemkat 6000 to try and turn Shard back to normal. Suddenly, Shard arrives, and manages to turn poor Greenbox to crystal, but as he grabs for Callie (who has the rewired device), T-Bone comes in on the Sandkat and rescues her. Undaunted, Shard heads for Megakat Dam, intending to crystallize Megakat City’s water supply.

Attaching the Gemkat 6000 to the Turbokat (which has been repaired), the SWAT Kats fly after him. Callie, though left behind, flags down the Katseye News chopper so she can watch the fight. The SWAT Kats blast Shard with the mining machine’s beam, but it fails because of his reflective crystal armor, and he succeeds in turning the entire water supply into crystal. Razor realizes that a high-pitched noise may shatter the armor, and they use Banshee Missiles. However, they fail miserably and Shard destroys them, then focuses the rays of the sun through his hand to create a super-hot beam, which he uses to shoot down the Katseye News chopper (luckily, it lands safely on the crystallized surface of the water). T-Bone then speeds up, going so fast that it threatens to tear the jet apart, and creates a huge sonic boom, which cracks Shard’s armor, returning him to normal size.

They blast him with the device, and he turns back into a regular kat, and everything he’d turned to crystal (Dr. Greenbox, Talon and Lem, Mayor Manx, Megakat Springs, and the Enforcers) also turns back to normal. Shard is arrested by the Enforcers, and taken back to “the brick litter box” (i.e., prison), whilst the SWAT Kats pull the Katseye News chopper and its passengers from the water.