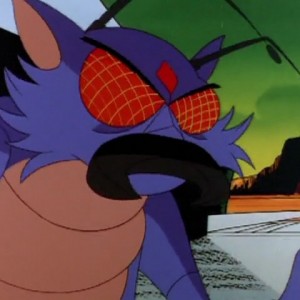 I know you like the thin air up here, it reminds you of home. We will find a high place, and then you and your kind will conquer my world! - Dr. Harley Street

A pregnant female member of the Ci-Kat-A species who came to the kat planet encased in a sticky slime that had somehow become attached to the Kat Sat 1 during its deep space exploration. Upon being examined in a MASA laboratory, she immediately bit Dr. Harley Street and a guard, bringing them under her direct control and also slowly turning them into Ci-Kat-A themselves. She laid several eggs in the space center’s nuclear reactor, so that her children would have food when they hatched. When Ann Gora and her cameraman Jonny, snooping around after being snubbed by Street despite being promised an interview about the Kat Sat 1 the previous evening, found the nest in the reactor, they were pursued first by the Ci-Kat-A-controlled guard and then attacked by the queen herself.

Her swiftly-hatching offspring began biting and converting all the guards at the space center, trapping Ann and Jonny, as the queen complained to an increasingly more and more transformed Street that there wasn’t enough radioactive material for her ever-growing brood. He promised her he’d see to it that she and her kind were taken care of. When the SWAT Kats and the Enforcers attacked the space center to rescue Ann and Jonny, neutralizing all of the queen’s natural offspring and killing or knocking out everyone they’d bitten, Street escaped in a van with the queen in back, driving her to the Megakat Nuclear Plant. The SWAT Kats gave chase.

At the nuclear plant, the queen was opposed first by the guards, who she disabled using her piercing shriek, and then by Razor, who she cocooned. She would’ve bitten him had not Street urged her to get inside. After breaking into the reactor, the queen ate several nuclear fuel rods, causing her to grow to gargantuan proportions. Grabbing a by now almost fully-transformed Street, she flew away with him, and he directed her to the reopened Megakat Tower, which is where she made her new nest in the penthouse. However, a visiting Callie Briggs found the nest, alerting the city’s protectors.

After the SWAT Kats took care of a completely transformed Street using an Octopus Missile, the Enforcers moved in, using their choppers’ flamethrowers to set fire to the penthouse, burning all the unhatched eggs. Commander Feral’s attempt to kill the queen herself using bugspray failed, so the SWAT Kats used grappling lines to tie up her wings so she couldn’t fly. As she fell, she grabbed Razor from the Turbokat cockpit, intending to drag him down with her, but her fired a grappling hook from his Glovatrix, pulling himself out of the alien insect’s grip, and she fell down to the Megakat Tower courtyard alone, landing hard but unharmed on the cement just as Mayor Manx’s limousine pulled up with him and Mr. Young inside.

As the queen crawled towards the limo, though, a burning section of the penthouse fell down on her from above, crushing her, splattering Manx, Young and their chauffeur in her slimy innards, ending the alien threat.