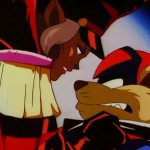 Airline Captain: This is your captain speaking. We are now in our final approach for the world’s busiest airport: Megakat International. Please fasten your-

T-Bone: Lucky we happened to be in the neighborhood, Razor.

Razor: (into radio) Attention Captain: we’re gonna take you in.

T-Bone: Yeah, but I wonder what caused that jet to plummet.

Turmoil hologram: Attention, citizens of Megakat City: I am Turmoil. You have witnessed a sample of my Vertigo Beam. With this weapon, I intend to disable every aircraft attempting to fly over Megakat City. However, I will allow Megakat City to use my airspace for the paltry sum of two million in gold… per week.

Felina: She’s got to be kidding!

Turmoil hologram: I will wait no longer than 0800 hours tomorrow for this week’s payment. Turmoil… out.

Felina: The is Lieutenant Feral. Turmoil, you’re under arrest. Oooh!

Turmoil: (voice over) As you can see, all attempts to resist will be futile. From now on, the skies belong to Turmoil! (laughs)

T-Bone: Guess we’re going to have to take this blackmailer in, buddy.

Turmoil: Give them a taste of the Vertigo Cannon as well, Lieutenant.

Razor: Don’t take any bows yet, T-Bone. We’ve got company.

T-Bone: Ach! What the- I’ve… got to… take control! Gotta… fight this… vertigo!

Turmoil: His flying is magnificent. It would be a waste to destroy such a fine pilot. Lieutenant! Cease the attack, and engage tractor beam to bring that craft on board.

T-Bone: Razor, we’re locked in a… tractor beam. Razor! Aw, crud! He’s out like a blown engine. I can’t let Turmoil get both of us. You’re outta here, buddy! That cold air oughta wake you up.

Razor: Huh? Wha-Where am I? T-Bone? He must’ve had a good reason to eject me out of the Turbokat… and now I see why.

Turmoil: As you have learned, the Vertigo Ray is nothing to take lightly, SWAT Kat, and neither is the proposition I am prepared to offer you.

Turmoil: Relax, T-Bone, and listen. I see you have lost your partner. Why not come and fly with me?

Turmoil: Crazy?! What does Megakat City have to offer that can compare with me? Money? I can give you more than you ever dreamed of. Power? You will have my invincible air force at your disposal. The most high-tech machinery in the world will be at your command.

Turmoil: Your rank will be second only to mine… once I am certain of your loyalty, of course.

T-Bone: (smiling) Eh… well, it’s nice to be… wanted. Besides, the Enforcers haven’t axactly been our biggest… fans. OK. Let me see the jets.

Turmoil: (extending sharp claw) I knew you would see it my way.

Razor: I was raised to always offer my seat to a lady. (sneaking away) I just hope I’m not too late to save T-Bone.

T-Bone: An M-24 Mega-thruster? Huh, I thought this thing hadn’t gotten beyond the drawing board stage.

Turmoil: (smugly) It hadn’t… until I perfected it.

T-Bone: Ha! I’ve gotta hand it to ya, Turmoil, you’ve thought of just about everything. (voice over thinking) Now is not the time to make my move. Too bad I have to bring her in; she’s kinda cool, in a nasty sort of way.

Turmoil: To a successful partnership.

Razor: Huh. Looks like I gave those girls the slip. (surprised) Whu…?

Lead Guard: Keep your hands up!

T-Bone: You don’t look half bad yourself.

Turmoil: Come! Let me show you the rest of the ship, and introduce you to your crew.

T-Bone: (voice over thinking) Razor’s sure takin’ his sweet time getting’ here…

(aloud) I see all your pilots are female.

Turmoil: They are the finest pilots in the sky. I never saw a male pilot who could outfly them… until today.

Turmoil: This is my main weapons panel. The auto-guns, ship’s main energy cannon, and….

Turmoil: Yes! (proudly) My greatest accomplishment. Lucky for you, you will be on this end of it from now on.

T-Bone: Heh, heh, yeah! Quite an operation you have here, Turmoil. (conspiratorially) We are gonna drain this city dry.

Turmoil: Yes! I like it when you talk tough, T-Bone.

T-Bone: I can do more than talk tough.

T-Bone leans in and kisses Turmoil. She embraces him and returns the kiss.

Turmoil: Mmm… Ah! I think I am going to enjoy this partnership.

Lieutenant: Turmoil! There’s an intruder on board! It’s the other SWAT Kat!

Turmoil hisses loudly, angrilly shoving T-Bone back away from her.

Turmoil: (angrilly) So! You were just distracting me until your partner could attack. Guards!

(to T-Bone) You will pay for this treachery!

T-Bone: Turmoil, wait! I’m on your side now. Let me prove it! (voice gets angry) Lead me to that ex-partner of mine, and I’ll toss him off the ship myself.

T-Bone: (voice over) You made a big mistake coming here, Razor.

Razor: Huh? What do you mean, buddy? And… what’s with the outfit?

T-Bone: This is the uniform of a flight commander. And I’m not going to let you ruin the best opportunity of my life.

Razor: T-Bone! What’s this all about?

Turmoil: You’re a clever kat; you will figure it out.

T-Bone: (to guards) Take him to the nearest airlock.

T-Bone: (to guards) Step aside.

Razor: T-Bone! What are you doing?

T-Bone: (whispering) Keeping us alive long enough to get the drop on this crazy she-kat. Consider our partnership disolved!

Turmoil: Guess I misjudged you… Flight Commander. (to two of the Guards) Go see if he lands on his feet. (laughs)

Razor: Did ya have to kick me so hard?

Turmoil: (furious) Oooh! Get them! After them! I want T-Bone destroyed! His betrayal will cost him his life.

Razor: Good thing you left before you had to meet your future outlaw in-laws!

Razor: I think the crew is a little upset you didn’t say goodbye, T-Bone.

T-Bone: I’ll leave the goodbyes to you, buddy.

Razor: Buzz-saw barrage… away! T-Bone! If that beam hits us, we’re goners!

Razor: (voice over) Turmoil’s really gonna be mad at you now!

T-Bone: You don’t know the half of it, pal. I just showered her with gifts!

Lieutenant: We’re losing power, Turmoil! The rest of the crew’s already bailed out. We have to abandon ship before it goes down!

Turmoil: And drop into the waiting arms of the Enforcers? I have other plans.

Turmoil: An unfortunate tactical loss, but I still have my freedom. Ugh! Nooooooo!!

T-Bone: (voice over as Turmoil reads letter) Turmoil… Thanks for the tempting offer, but it never would have worked out between us. Guess I’ll always be a good guy, and you’ll always be a bad girl. Keep your whiskers clean, beautiful. Your Top Gun, T-Bone.

Turmoil laughs maniacally as she drops the torn bits of the letter out the window.