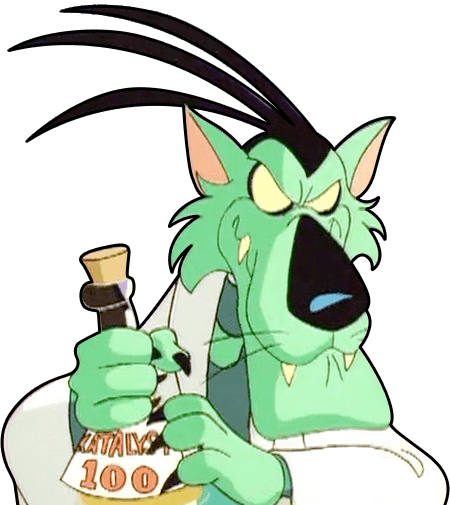 Soon, this foul city will be one giant, glorious swamp!

One of the SWAT Kats most dangerous and elusive foes, Dr. Viper uses his demented intellect to create and command biochemical monsters and mutations to further his goal of transforming Megakat City into a swamp.

This self-mutated kat-lizard would like nothing better than to transform all of Megakat City into a slimy swamp under his utter control! Using his twisted mastery of biochemistry, Viper can challenge our SWAT Kats with a hideous horde of unnatural beasts, from giant Bacteria Monsters and savage “Plantimals” to grotesque Fungus Creatures.

Elrod Purvis was a greedy biochemist who worked with Dr. N. Zyme on the Viper Mutagen 368 formula which was supposed to regenerate plant growth.

While Dr. Zyme wanted to give the formula to the city, Purvis wanted to sell it to the highest bidder and stole the formula along with Dr. Zyme’s notes.  When Dr. Zyme caught him, Purvis fled and the formula ended up spilling all over him after falling down some stairs.

Purvis died, but later in the morgue, Viper Mutagen 368 brought him back to life as well as mutated him into a snake like kat.

Purvis became vengeful as well as insane and began calling himself Dr. Viper soon after his transformation into a half-kat, half-snake hybrid. Since then has tried repeatedly to take over and turn Megakat City into his own swampland (alternatively referring to it as either “Megaswamp City” or “Mutation City”).

Hahha, nothing can stop me now. Katalyst X-63 has made me bigger and badder than ever!

Viper’s next known appearance in Megakat City had him mutating his fellow evil-doer Morbulus into a giant bacteria monster and using him in an attempt to steal Katalyst 99 from Megakat Biochemical.

Later, he took over the Megakat Tower with his army of plantimals, placing a gigantic spore pod on the roof so that it will explode and shower the city with spores, turning it into a swamp. Viper teamed up with Dark Kat and the Metallikats in a bid to destroy the SWAT Kats but their alliance fell apart because the villains cannot work together.

When Dark Kat failed to suicide-bomb the SWAT Kats, his lair blew up, but somehow Viper survived. Not long after this Viper flooded Megakat City with a chemical called Katalyst X-63 in a second attempt to turn the city into a swamp. This time he nearly succeeded, but the SWAT Kats able to retrieve the anti-mutagens from Megakat Biochemical and restore the city to normal, despite T-Bone being mutated and Viper using the Katalyst on himself to become a skyscraper-monster.

Dr. Viper was voiced in all five of the episodes he appeared in by Frank Welker.