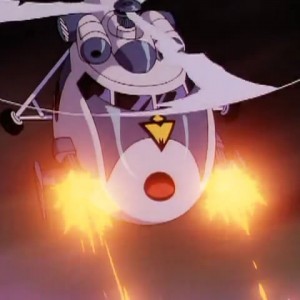 The Enforcer chopper is the standard mode of air transport employed by the Enforcers. It is a single-rotor helicopter with a crew of two, with wheeled landing gear (as opposed to runners or pontoons); its armament consists of side-mounted mini-guns and a variety of missiles. In addition to the pilot and co-pilot, at least three to four passengers can fit in the back, although the cargo area is not necessarily designed with passengers in mind. The overall effectiveness of the Enforcer chopper is questionable; more often than not their weaponry proves useless against the villains that plague Megakat City, and their tendency to be destroyed is legendary. Regardless, Commander Feral relies on them more heavily than any other Enforcer vehicle (suggesting they are cheap to produce), and his signature of “Bring me chopper backup!” (or some variation thereon) can often be heard.