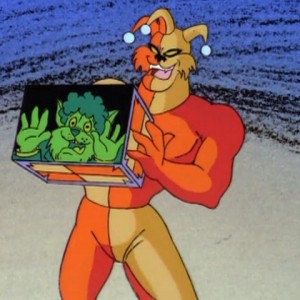 I guess madness just brings out the best in us! Come join me, Ringtail, and Madkat will live again! For revenge against ALL our enemies! - Kat-in-the-Box

Institutionalized comedian Lenny Ringtail strikes a bargain with the vengeful spirit of the Medieval court jester Madkat to get revenge against the modern day jester, king, queen and knight who he blames for his failed career and imprisonment.

Insane comedian Lenny Ringtail, whose mind snapped when he was turned down by The David Litterbin Show, lets himself be possessed by the vengeful ghost (yes, another one) of a medieval court jester who suffered a similar rejection hundreds of years ago.

The result is Madkat (Roddy McDowall), a wisecracking, shapeshifting harlequin who uses his magical powers to kidnap “the king, queen, knight and jester” (AKA Mayor Manx, Deputy Mayor Briggs, Commander Feral and David Litterbin) one by one, then vanish into thin air before the SWAT Kats can stop him. Madkat’s Beetlejuice-like stunts make for some wonderfully surreal action sequences, but he just isn’t a memorable character , and for a comedian, he’s not very funny, either.

McDowall does a good job as Madkat, but an actor with more of an off-the-wall sense of humor (Dan Castellaneta? Micky Dolenz? Matt Frewer?) could have given the character the Joker-like personality he needed. And unlike his inspiration, David Litterbin (John Byner) comes across as surly instead of amusingly sarcastic. B

Appearances: Lt. Steel, who somehow avoided getting fired after his irresponsible actions in “The Wrath of Dark Kat,” assumes control of the Enforcers when Madkat captures Commander Feral.

Trivia: When “Enter The Madkat” aired during the first season, it ran with the wrong closing credits (from “Metal Urgency”), so guest voice actors McDowall, Byner and James Hong initially received no recognition for their work. The credits were corrected during the second season.