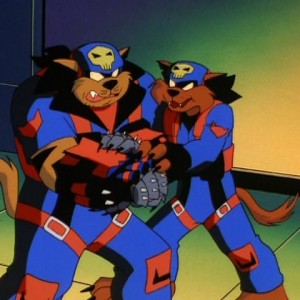 Hold it, hold it. Are you telling me that somewhere in this world are a couple of evil SWAT Kats? - T-Bone

Villainous variations of the SWAT Kats from a parallel dimension accessed by the real SWAT Kats by accident.

They serve the alternate dimension’s Dark Kat, and plot with the alternate Callie Briggs to overthrow Megakat City’s government. They exhibit alternate characteristics to the real SWAT Kats, such as T-Bone being a clumsy pilot, Razor being a lousy shot, and the two of them hating each other.

They were presumably killed when a bomb they were carrying exploded, though they were rumored to appear in a proposed third-season episode. They appeared only in “The Dark Side of the SWAT Kats”. They’re the only characters shown in the alternate dimension who don’t look like their counterparts but only the viewers seemed to be able to tell the difference.