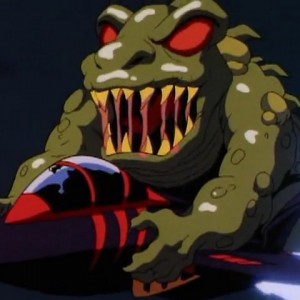 What the-? That thing's drooling all over my cockpit! - T-Bone

Formerly just a common pet shop frog it was mutated by Dr. Viper via Katalyst X63 and went on a rampage throughout the city. Leaping into the air and grabbing onto the Turbokat its acid drool nearly signified the end for the SWAT Kats until Razor used the upper-missile launcher to get the mutation off. Later analyzed by Dr. Konway it was used as a test subject for an anti-mutigen formula, which proved successful as the frog returned to normal.