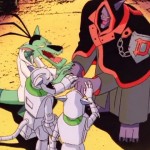 At Megakat Biochemical Labs, the two guards on duty are slacking off and eating donuts.

One of them, Selby, thinks he hears something, so his partner goes to check it out, but is attacked and eaten by a huge, mushroom-like monster. The creature then makes short work of Selby as well, and Dr. Viper arrives, and he and the creature begin to search for Katalyst 100, only to find it is in the hands of Dark Kat’s Creeplings, who had already broken in. A fight then breaks out for ownership of the Katalyst. Meanwhile, the SWAT Kats are not far away, out to test the new swivel turret they’ve fixed for the cement cannon (it moves wherever Razor looks thanks to special goggles).

T-Bone picks up the alarm from Megakat Biochemical Labs, so they head there. Razor targets Dr. Viper, but because the calibrations are off, he misses and hits a store of combustible chemicals, blowing the place up. The Enforcers arrive, and Feral immediately pins the whole thing on the SWAT Kats, who hastily depart. In the sewers, Dr. Viper encounters Dark Kat, who says their encounter has given him an idea, and he suggests they team up to fight the SWAT Kats together, and Viper carefully considers the offer. At Enforcer Headquarters, Feral tells his sergeant to arrest the SWAT Kats on sight, then drops off a bag of cement slugs (from the cement cannon) at the evidence room.

No one notices the Creeplings come through the floor and steal the deactivated heads of the Metallikats, Mac and Molly. Back at the hangar, T-Bone and Razor fix the cement cannon turret (T-Bone gets hit in the head in the process), and Callie calls, warning them that Feral is dead-set in his belief they destroyed Megakat Biochemical Labs for no reason, and is out to get them. In Dark Kat’s lair, he and Dr. Viper activate the Metallikats, who of course refuse to help them fight the SWAT Kats. However, Dark Kat had anticipated their refusal, and explains he put neuroscrambler collars on their necks, which allow him to control them through force. Reluctantly, Mac and Molly agree to help.

The following day, Mac and Molly rob the Megakat Savings Bank, and successfully elude the Enforcers, causing several car crashes in the process.

The SWAT Kats arrive, and the Metallikats drive into the Megakat Tunnel, where the Turbokat cannot follow, so Razor pursues them on the Cyclotron. However, Dr. Viper’s mushroom monster is clinging to the ceiling of the tunnel, and it grabs Razor off the Cyclotron. The Metallikats decide to finish Razor off themselves, and are about to fire when Viper stops them (citing they need Razor alive), causing the blasts to instead hit the mushroom monster, causing it to drop Razor.

He jumps into the Metallikats’ car and drives out of the tunnel. T-Bone, not knowing it is Razor driving the car, fires on it, but luckily Razor bails out before the missiles hit, destroying the car. The Metallikats come running out, firing on Razor, but T-Bone knocks them down with some missiles, and then picks up Razor before the Enforcers arrive. Dark Kat scolds his cohorts for their screwup, but announces he has another plan to capture the SWAT Kats. Callie contacts the SWAT Kats that night, stating they’re in even more hot water with Feral since all the bank money got blown up along with the Metallikats’ car. She has to cut the conversation short, as she and Mayor Manx have to go to the museum for the opening of the new Manx Wing.

However, Manx notices that their regular driver is not driving their limo, and in fact it turns out to be Mac in disguise, who gases them, knocking them out. Commander Feral appears on the news later, announcing the SWAT Kats as criminals, but Dark Kat interrupts the show with a broadcast of his own, stating he has Mayor Manx and Callie hostage, and will kill them unless the SWAT Kats surrender to him tomorrow at sunrise, at the old tuna factory on Megakat Island. Of course, the SWAT Kats zoom to the scene, or so the villains think. Dark Kat targets and destroys the Turbokat, and everyone assumes the SWAT Kats are dead. However, they are very much alive, and arrive in a submarine/terrain vehicle that blasts through the factory wall (apparently they were controlling the Turbokat by remote).

The SWAT Kats free Manx and Callie from the glass tube holding them, but are then caught in Dark Kat’s “mega force-field bubble”, which allows things in, but not out.

He then announces that soon Megakat City will become Dark Kat City, which causes Dr. Viper to demand to know of their deal to divide the city equally. Dark Kat admits he was lying, and orders the Metallikats to shoot Viper and his monster, but they don’t budge, and Viper reveals he removed their neuroscrambler collars. They open fire on Dark Kat, who defends himself with a laser, and soon it’s a free-for-all, when a masked kat enters and deactivates the force-field bubble. The mushroom monster pulls off the kat’s disguise, revealing it to be Commander Feral, who reluctantly joins the SWAT Kats in fighting the villains.

They shoot the cable holding up the tube that previously held Callie and Manx captive, and it falls onto the mushroom monster, trapping it. They then defeat all of Dark Kat’s Creeplings, and Dark Kat tells the Metallikats to decide who they hate more; him or the SWAT Kats. They decide they hate the SWAT Kats more and the villains approach the vigilantes, shooting nonstop, when Razor uses his grappling hook to pull the switch activating the force-field bubble again, trapping Dark Kat and the Metallikats inside. Feral stops Dr. Viper from slipping out the back entrance, and throws him into the force-field bubble, too.

T-Bone admits he’d never thought he’d see all these villains trapped together, and then Dark Kat announces that if he has to lose, then everyone else will too, revealing the entire factory is wired to blow. However, the SWAT Kats, Callie, Manx, and Feral make it to the submarine/terrain vehicle and escape out to sea before the whole island goes up. No one is totally certain the villains are dead; they’ve survived worse before. As for the SWAT Kats’ jet, Feral agrees to loan them an Enforcer one until the city pays to have theirs rebuilt.