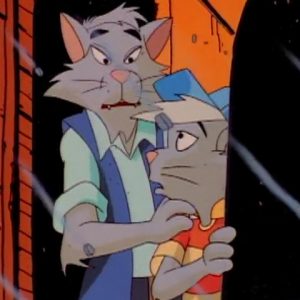 What are the SWAT Kats doing, Daddy? - Little Boy

This kat was the father of a little boy who lived in Megakat City. The two were out one day when the Turbokat appeared overhead. The boy excitedly pointed at the jet, and everyone around began cheering. Suddenly, however, the jet began firing on nearby buildings. The father grabbed his son’s arm and dragged him to safety. As the two hid, the boy asked his father what the SWAT Kats were doing, but his father had no answer.

He and his son were originally designed to appear in The Giant Bacteria. However, for some reason they weren’t used in that episode.