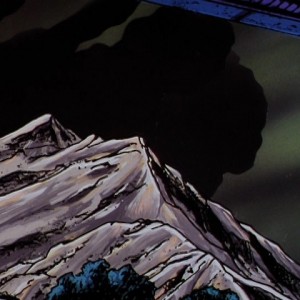 The epicenter of the mysterious tremor has been pinpointed in the Megakat Mountains, east of the city. Unit One, Mountain Sector, check it out. - Enforcer Dispatchers

A mountain range outside of Megakat City. They were highly volcanic. Despite the danger, the mountain was popular with tour groups. Dark Kat had one of his many bases hidden inside of a volcano in the region. The lost pyramid of Katchu Picchu was also buried somewhere in the region, and Dr. Abby Sinian’s archaeological expedition to unearth it encountered the Pastmaster, who used Katchu Picchu’s jeweled headdress to summon the pyramid up from underground and unleash the horde of giant mummies from within.

In the unfinished episode Turmoil 2: The Revenge, Turmoil’s base, the Cloud Fortress, is located in the snowy peaks of the mountains.