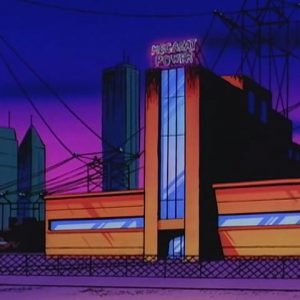 All that’s left is to plug in to the main electrical grid. Then the power to destroy Megakat City will be mine! - Dark Kat

One of the primary power plants supplying electricity to large parts of Megakat City. It was one of Dark Kat’s targets following the completion of his Black Widow. After he drained all the electricity from one of the plant’s sub stations, Dark Kat took his Black Widow to the main plant, which by then had been surrounded by Enforcer commandos. Despite their valiant efforts, the villain broke through their defenses, and the Black Widow used its claws to rip the roof off of the building. In draining Megakat Power, Dark Kat threatened to black out the entire city. A pair of Slicer Missiles took out the building’s mega-transformer tower, cutting off the Black Widow from continuing to drain power, but Dark Kat boasted that he already had enough energy to make the Black Widow a formidable fighting machine.