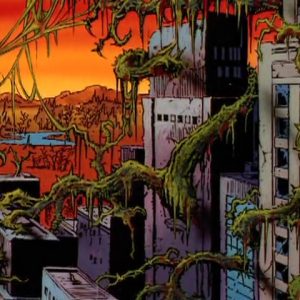 I can see it all now. A spectacular new Megakat City. No more ugly metal and plastic, only beautiful ssswamp, ruled by me! Dr. Viper’s Megaswamp City! It will be ssso beautiful! - Dr. Viper

Dr. Viper’s grand vision for Megakat City was to transform it into a a giant swamp. His first attempt to do this involved placing a giant spore pod atop the Megakat Tower, whereby it would explode and cover the whole city in “beautiful spores,” transforming it into what he called “Dr. Viper’s Megaswamp City.” He failed, however, when the SWAT Kats dropped a load of super rocket coolant onto the tower, freezing the spore pod solid before it explode.