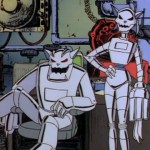 The following are the most recent posts from a dedicated MegakatCity.com thread for Metal Urgency:

I always thought it was weird that Feral calls the generic commando "Sergeant" at the beginning. Come to find out, in the storyboards, it is the Enforcer Sergeant and another officer inside the tank. And since, as in the finished episode, only Feral bails out in time, this means Storyboard!Sarge dies. And yet he still turns up later in Feral's office (where he's even referred the as the Enforcer Sergeant).

I think what happened is they didn't actually intend to kill him and the other officer in the tank off, and genuinely forgot about them during the bit where Feral bails. So then, realizing their error, they animated it as two expendable commandos instead of a recognizable recurring character.

Of course, this still means nobody comments on those poor guys being flattened. Let's see what the early script draft has to say.

Edit: Nope. The squashed Enforcers in the tank are never brought up.

Also, the script reveals the answer to Mac's question during the Metallikats' drive to Puma-Dyne - "What're you doing?!" in response to Molly releasing and detonating the back half of the Metallikat Express - by having Molly explain she wasn't done blowing up the Enforcer tanks. Why keep Mac's question, but edit out Molly's answer?

Oh my gosh. I was watching this episode and I was looking away for something and noticed something at the corner of my eye. The part where Professor Hackle is walking up to the broke wall to watch Mac and Molly drive away, the Professor totally blinked out of frame for a split second. It's so sudden but now that I saw it, I notice it much more easier.

Felix Kayne wrote:
Hey, I don't mean to revive long not updated thread, but I just found something that I don't think was pointed out.

In Episode 2, when they came back to the hangar T-Bone stamped the wall with a mark. In that episode, I counted 13 there, including the newly added one for Morbulus.

This is Episode 10, and check what I see.

Hey, I don't mean to revive long not updated thread, but I just found something that I don't think was pointed out.

In Episode 2, when they came back to the hangar T-Bone stamped the wall with a mark. In that episode, I counted 13 there, including the newly added one for Morbulus.

This is Episode 10, and check what I see. Kooshmeister wrote:
Even though only the weapons systems are thought-controlled (Hard Drive appears to drive the Behemoth using joystick things), the entire vehicle spazzes out and goes rogue upon having its circuitry fried, driving itself through a wall before finally stopping. This means that a surge in the system causes the operator to lose control of literally everything in the tank, not just the weapons, and be incapable of stopping himself from crashing. In what universe does this make sense?

Maybe that was just a malfunction triggered by the overcharge in the circuits, impossible to cancel cos all was fried. But yeah, the fact that there was no automatic shutdown is a fatal failure coming from the great minds of Pumadyne... <u_u">

Anyway, I need to admit that I enjoyed that part of the episode as much as Hard Drive did xD

Randomly, it occurs to me, the Behemoth really sucks. I know it was a prototype and not a production model, but, dang, Hard Drive's rampage with it is so brief he never even manages to get out of Pumadyne with it. What about it sucks? Well, apparently, it has no failsafe or dead man switch:

1. When the circuitry is fried, disabling the thought helmet, Hard Drive apparently has no way of operating the weapons manually (i.e. the old-fashioned way, with a trigger). This is a huge design flaw. I know thought control is the point, but still, you'd think Pumadyne would've wanted some way for the operator of the tank to continue their mission/defend themselves in the event that the mental control angle was disabled.

2. Even though only the weapons systems are thought-controlled (Hard Drive appears to drive the Behemoth using joystick things), the entire vehicle spazzes out and goes rogue upon having its circuitry fried, driving itself through a wall before finally stopping. This means that a surge in the system causes the operator to lose control of literally everything in the tank, not just the weapons, and be incapable of stopping himself from crashing. In what universe does this make sense?

These issues helped here because it was a villain driving the tank, but imagine if it were good guys attempting to use it to thwart evil. Those are some hideously incompetent design flaws.

Fun fact: one of the "technical" descriptors here is "CORPSE MAGGOTTS".

In closer inspection of these frames, I did a google search for their meanings to see what would pop up.

I have no idea WHAT the heck international auto racing had to do with the status of Jake and Chance's bodies but... yeah, it's all racing related. LOL I wonder if someone is a fan and just randomly threw in those things just to have something technical looking, figuring no one is gonna notice (just like in the newspaper article that doesn't match up the headline or pic I mention here). XD

Also, YES thanks for making those gifs I requested btw!

Guess so. I just feel it would've been a step backwards in his character development up to that point and undone a lot of his more noble moments like refusing the Metallikats' offer in this episode, and, in fact, his aligning himself with Turmoil would seem to fly in the fact of the explanations he gave to them and Callie about why he did it. "I don't deal with scum!" (no deals with villains) and "I just didn't want to owe those two hoods anything" (he finds the concept of being somehow indebted to villains distasteful). If he sided with Turmoil, even after Manx had fired him and he wasn't in law enforcement anymore, he'd not only making a deal with a villain, but indebted to her (for hiring him).

Now, I get that Falk's idea is that when Turmoil makes her offer, Feral is at an extremely low point and consequently may be open to her suggestion, possibly even believing that his strict and honorable way of doing things hasn't worked out for him so far, so maybe it's time to break the rules and strike out on his own since, hey, it worked for the SWAT Kats, but I'd prefer it if the path the story took had Feral realizing he's basically sold his soul and turning against Turmoil out of a despairing sense of guilt and contributing to her defeat, redeeming himself, as opposed to Falk's idea where he only betrays her when her defeat is certain so he won't go down with her. Falk clearly thinks less of Feral than I do, heh.

Were Feral to genuinely turn bad but eventually equally genuinely realize the error of his ways, I can see an ending wherein Turmoil taunts him about how willing he was to do as she said and so he's just as guilty as she was, and he says something like, "Yes, until I looked beyond the beauty and saw the inner ugliness," and, of his guilt, "Yes, and it's something I'll have to face myself." That, to me, is just far more interesting than, "Haha, I was evil all along and am now going to somehow seamlessly slip back into good guy and apparently go back and forth between being a good guy and a bad guy from now on!"

But, as you say, agree to disagree.

Guess we can agree to disagree that some fans find it strange that other fans would appeal to the idea that Feral actually does fall into the "jerk" category along with his other traits as a character (some of which are pragmatic and sympathetic for instance) based off the SWAT Kats origin story or any other instances of his bullheadedness in the show. I personally think it's reasonable, but to each their own?

As for the writers sticking with the original script for Feral and Turmoil and fleshing out his character more, I think it would have worked out and not seen as "too late" of a development for Feral, as it was only the second season of the series, and characters gain depth/become good/become bad/become awesome/being morally ambiguous and whatnot all the time in books and TV series, many even far further along than a second installment in a series, and it works swimmingly. I enjoy thinking about Feral getting expanded upon like that, because I sense lots of fun and untapped potential in him as a character

I'm excited to see him (and all the other characters) given more depth in the reboot if the kickstarter process succeeds--for good or bad. If they're gonna keep him as is, that's also fine. If they expand more on his sympathetic qualities, also cool. If they make him a more complicated character, with a mix of sympathetic and non-sympathetic traits, that's cool, too! I dig it