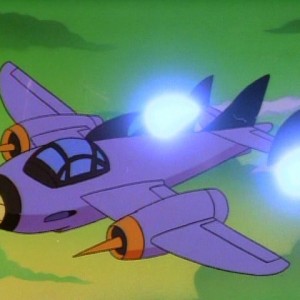 Twin-engine, single-occupant purple jet flown by Morbulus during his “Refinery Reign of Terror.” It had a distinctive row of spikes down the back, likely just for looks. Its armament consisted of missiles and bombs, and it was also faster than the Turbokat. After the SWAT Kats used the Cookie-Cutter Missile to “cut” Morbulus out of his cockpit, the pilotless jet crashed into Megakat Bay.