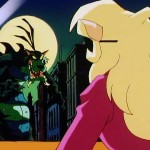 The following are the most recent posts from a dedicated MegakatCity.com thread for Mutation City:

I either let this slide initially, or didn't notice it way back when, but I can't let it go unremarked upon.

He didn't replace him. Zyme was (is?) a Megakat Biochemical Labs scientist. Konway works for the Enforcers. They're both biochemists, but they work at two different places.

I think you're giving Konway too much credit here; just as Zyme did in The Giant Bacteria, he goes for the obvious solution. The only difference is the anti-mutagens worked. Zyme wasn't incompetent, just a victim of the script which dictated that the monsters only be weak to electricity.

And since Viper didn't make his mutants immune to anti-mutagens like he made his bacteria monster(s) immune to antibiotics, I'd say this reflects more on him than it does on Konway. Konway wasn't any more competent than Zyme; Viper just got sloppy. He didn't "science-proof" his monsters like he did previously.

And in poor Zyme's defense, Dr. Konway wasn't under the same time crunch his colleague was. He was under a time crunch, just not such a severe one. He and everyone else in the room were safe for the moment on the eleventieth floor or whatever, so he had more time to study the mutated frog, figure out which katalyst Viper had used, and prepare the right dosage of anti-mutagens.

Compare this to Dr. Zyme's situation. Even if the bacteria monsters hadn't been immune to antibiotics, he only had a few minutes to prepare ("On such short notice, this is the best I could do."). In addition, they were in immediate (or soon to be immediate) danger; "Those things are heading right for us!" So he had to work faster than Konway did. And finally, unlike Konway, he had no specimen to study before making his plan; he not only had to guess what the creatures were (and to his credit, he guessed correctly), he also had to guess at the right kind of antibiotics to use, winding up going for the strongest dose of the strongest kind just to be sure. It isn't his fault it didn't work.

The only thing he does wrong is that he gives Feral only one missile full of the stuff. What, did he expect Feral to return and reload after successfully killing the first monster?

Betaruga wrote:I kinda like that it implied that Dr. Viper as we knew him died... Not because I don't like Viper, but because... well, it was like, closure?

I always entertained the notion that if he'd returned, he would've had a new appearance. Something halfway between his giant-self and his old self, sort of akin to the action figure he got. But preferably less buff. Seriously, Viper and buff do not go together. When he's a giant, the boy's got some serious love handles.

I totally agree with that. Seeing that he got a tank of antimutagen blasted on his face, I'd imagine he took some heavy damage in cellular level and needed to seriously lay low for quite a while to recover. While recovering, he'll spend his time seeking to improve himself through a series of experimentation and mutations. So next time we see him, he'll be sporting a new look as if he's been reborn and he intents to share it with the world.

So, do T-Bone's clothes transform, too? I mean, when he returns to normal, shouldn't the entire right half of his flight suit and helmet be gone? There was a similar problem in The Giant Bacteria where Morbulus' wifebeater and boxers transformed along with him.

I love this episode. Also being a big Razor fan. I just have to geek out when he pilots the Turbokat for the first time. Season 2 was really Razors season he had so many good moments. I felt in the Season 1 he was portrayed more as the brain and made more to look like a wimp sometimes. In season 2 he was more equal to T-Bone when it comes to fighting and action scenes.

Never noticed the fact that Felina did the Robocop gun twirl in that episode. That makes her even cooler.

The Adventure of X-Treme Callie! Callie goes dirtbikin' on the Sandkat and encounters various desert dangers and has to kick much booty!

Kooshmeister wrote:
But I guess I can see her exorcising her inner frustrations by tearing around the desert in that thing.

Now that's a fanfic scene I'd love to read!

Being the second most important politician in Megakat City, and the one shouldering almost all the work load, means she must not get away from the office much. But I guess I can see her exorcising her inner frustrations by tearing around the desert in that thing.

razorREO wrote:
I guess she took him up on that offer, and THAT'S why we never saw that machine again.

Or they just never had any further use for a tracked desert bike thing.

LOL the projectile motorboats... again, something that they suddenly had just for the right moment and never seen again, along with the Sandkat, Turbomole, Thundertruck, etc. Geez the toyline could have been so frikkin' awesome with all those vehicles!

And one of my fav lines "Locked." kick "Unlocked". XD You know Razor's momma DID put agracite in HIS cereal (or he started eating it after the Caverns of Horror? I forget the order of eps anymore lol) so he's got rock foot hoooooi!

Your commentary is always hilarious, and spot on! Plus often things I didn't notice are pointed out, or things that I felt and am like "YES THIS!^^^^"