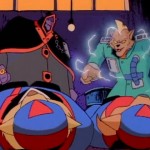 Night of the Dark Kat

Enforcer Commando> I thought I saw something out there.

Enforcer Officer> Relax, son. Only a fool would try to get into this research center. If surveillance cameras and electrified fences don’t stop ‘em, the Enforcers will. [chuckles]

Hard Drive> Arrogant fools! Nothing can stop Hard Drive when he’s wearing his surge coat! [laughs] I can’t wait to wrap my circuits around Megakat City’s newest defense secrets. Time to boot up these computers. Now Hard Drive can take on a few tasy megabytes!

Enforcer Officer> What the?! We’ve got an intruder in the computer control room!

Hard Drive> So, they know I’m here, eh? Too late! I’ve deleted their files! Now all the defense secrets are right in here, and whoever wants them will have to pay me big time! [cackles]

T-Bone> This new engine’s got enough mega-thrust to keep us airborne all by its lonesome.

Razor> Yeah, it’s amazing what you can find in a salvage yard, huh, T-Bone? I’m picking up an emergency Enforcer broadcast!

Enforcer Officer> I repeat, Commander, someone’s broken into the Megakat City Defense Center and wiped out all our top secret computer files!

Feral> But how could anyone get past all the security?

Enforcer Officer> Uh, I don’t know, sir. But there was a mysterious power surge before the alarms went off.

Feral> Power surge? Computer theft? It sounds like Hard Drive’s back in town!

Razor> Yeah, guess now he’s moved up to stealing defense secrets. Hey, maybe our surge detector can give us a lead on this techno-weasel. Bingo. Power surge registering in Sector 5.

Razor> Uh, T-Bone, we’ll get there faster with all our engines.

T-Bone> Roger that. This is Sector 5, and that looks like a power surge!

Razor> Careful we don’t lose it.

T-Bone> No blip gives me the slip.

T-Bone> Aw, crud! How are we gonna catch that lightening bug?

Razor> Maybe these Wire-Clipper Missiles will do the trick. Bingo! Let’s see what we’ve got!

T-Bone> Careful, that wire could still be live.

Razor> Don’t worry, my glovatrix is specially-insulated, and so is this missile. Whatever’s inside won’t be able to arc out.

Hard Drive> Let me out of here!

Feral> Do you know how much havoc you two have caused tonight? You’ve cut the power to half of Megakat City!

Feral> Take him to a holding cell. We have to recover the defense secrets he stole.

Razor> Keep him in that insulated missile, Commander.

T-Bone> Yeah, this guy gets a real charge outta zippin’ through wires.

Feral> What do you think I am? Stupid?

Feral> I want those secrets now!

Feral> Fine. This digital deadbeat can just stay here ’till his battery wears down.

Chance> After handlin’ the Turbokat, drivin’ this tow truck is one big snooze.

Jake> Hey it may not be glamorous, Chance, but there’s an old lady stuck in a ditch out here who’s depending on us.

Hard Drive> You little creeps! When I get out of here I’m gonna light you up like a Christmas tree! [gasps] Dark Kat!

Dark Kat> Do I make you nervous, Hard Drive?

Hard Drive> Uh, you want the defense secrets? They’re in the surge suit, all yours! N-no charge!

Dark Kat> Silence! I don’t need defense secrets! I want the SWAT Kats destroyed! And you’re going to help me!

Hard Drive> Y-Y-Yes, of course, but nobody can stand up to that jet of theirs.

Dark Kat> Yes, their precious jet. Without it, the SWAT Kats are just two jerks in flight suits. That’s why you’re going to help me steal the Turbokat! And then I will hold Megakat City in the palm of my hand! [laughs]

Old Lady> I called Megakat Auto Club thirty minutes ago! I should get this tow for free!

Jake> We got here as fast as we could.

Old Lady> Hey, come back! I’m reporting you to my auto club!

Ann> This is Ann Gora, Kat’s Eye News. Someone or something is causing mass destruction.

Hard Drive> That someone is me, Hard Drive! And I’ve got a personal message for the SWAT Kats. [chuckles] Catch me if you can!

Razor> No biggie, I’m picking up his surge loud and clear. It’s stopped. I’ve got the coordinates locked in.

T-Bone> Settin’ her down.

Razor> He’s hiding in there.

T-Bone> I can’t wait to grab that high-voltage lowlife. Gotcha!

Dark Kat> And I’ve got you!

Dark Kat> Seize them! What did I tell you? Without the Turbokat, they’re nothing!

Hard Drive> So, care for a little more juice?

Dark Kat> Wait, I don’t want them destroyed so quickly. I want them to have time to think about it, first. This machine will mash the SWAT Kats into litter bits!

Dark Kat> Cocky ’till the end, I like that. But make no mistake. This is the end.

Hard Drive> Oh, and don’t worry about your jet. I’m going to take real good car eof it for you! [laughs]

Dark Kat> You know what to do, Hard Drive. Don’t fail me!

Hard Drive> I still say you should’ve let me fry those two!

Dark Kat> No need to worry. Even if the SWAT Kats manage to shut the conveyor belt off, it’s wired to blow the warehouse sky high!

T-Bone> Yeah. If we don’t get outta this, who’s gonna tow that little old lady?

Little Boy> What are the SWAT Kats doing, daddy?

Ann> Attention! This is Ann Gora with a Kat’s Eye News flash! The SWAT Kats are trashing Megakat City!

Ann> Amazing as it may seem, our beloved SWAT Kats have destroyed two skyscrapers- Make that four skyscrapers! Mayor Manx, Commander Feral, do you have any explanation for the SWAT Kats’ unprovoked attack?

Feral> I’ve always said the SWAT Kats are nothing but lawless vigilantes!

Callie> But we don’t know for sure if-

Manx> I want to assure the public we have the situation well in hand. Assure them, Feral.

Feral> Even as we speak, an Enforcer squadron is in the air to take out the Turbokat!

Callie> You can’t just shoot them down! We have no proof it really is the SWAT Kats!

Feral> That’s proof enough for me!

Ann> Do you have a statement about the SWAT Kats, Deputy Mayor Briggs?

Callie> Not until I confirm it’s really them in that jet. Let’s go take a look!

Dark Kat> You know what to do!

Feral> SWAT Kats, you’re under arrest! Fire at will! Blast them out of the sky!

Dark Kat> You heard him, Hard Drive. Blast them out of the sky!

Callie> I can’t see the pilot! Can you get us closer?

Al> After what those SWAT Kats did to the Enforcers? No way!

Callie> I can’t believe the SWAT Kats could do this.

Hard Drive> [using voice-simulator] You have fifteen minutes to empty the Megakat City Treasury, or we’ll level this town!

Feral> Now you listen to me-

Hard Drive> [using voice-simulator] No, you listen, Feral! Have that money on the steps of City Hall by noon, or the SWAT Kats destroy Megakat City! [normal voice] Your electronic voice-simulator worked like a charm, Dark Kat.

Ann> Well, Deputy Mayor, what does the city intend to do?

Callie> What can we do? Pay up.

T-Bone> It’s no use. We need teeth like theirs to cut through these ropes.

Manx> Every penny in the treasury is yours, SWAT Kats. It’s all there.

Hard Drive> [using voice-simulator] If it isn’t, we’ll be back! [laughs]

Callie> I still can’t believe the SWAT Kats are robbing the city.

Feral> They won’t get away with it. I’ve put a homing device in one of the money bags.

Razor> Another second and I’ll be out of these ropes!

T-Bone> Me, too! Cutting it a little close, aren’t we?

Razor> “Cutting it a little close, aren’t we?”

Callie> SWAT Kats, how could you?

Feral> You’re just in time, Miss Briggs. I’m arresting your friends. But first, I’m going to find out who they really are. It’s only fitting you spend your life in prison under your real names.

Razor> Back off, or the Deputy Mayor is history!

T-Bone> Razor, what the- Right, history!

Feral> Stop firing, you fools! You might hit the Deputy Mayor! Now, get after them!

Callie> Let’s just say I’m giving you the benefit of the doubt. Now why’d you destroy half the city?

Razor> It was Dark Kat! He and Hard Drive stole the Turbokat!

Callie> And the entire city treasury! I knew it wasn’t you! But now, how will we get the money back?

Razor> By getting the Turbokat back! And this mega-sensor will lead us right ot it!

T-Bone> But first we gotta lose Feral. This baby’s pretty darn fast for a street machine.

Callie> Yeah, I have a couple of great mechanics who tune her up for me.

T-Bone> Too bad you can’t keep the Turbokat running this smooth, Razor. Stay in the car, Miss Briggs.

Dark Kat> I would say that Megakat City is in a bit of a financial crisis.

Hard Drive> Yes. Manx will probably have to raise taxes.

Dark Kat> Then I’ll just send you off in the Turbokat for another collection.

T-Bone> Sorry, the Turbokat has been repossesed!

Dark Kat> Get them!

Hard Drive> Ooh, I knew I should’ve fried you when I had the chance!

Hard Drive> I’m out of here!

Razor> You said it!

Dark Kat> You won’t be needing this!

T-Bone> Ah, thanks for puttin’ the city’s money to such good use.

Callie> No problem. Now let’s get the rest of it back to the city treasury or I don’t get paid this week.

Manx> Looks like we’re getting back, Feral. With interest.

Feral> Perhaps, Miss Briggs. But I’d still like to see you two without your masks.

Old Lady> Well, where have you two been? Oh, no, no, no, don’t tell me. You were off saving the world.

Jake> But we brought you back a pizza. Hey, hope you like tuna topping.

Old Lady> What? No anchovies? Well, hey, this isn’t too bad.

Chance> And ’cause we were so late, we’re gonna give your car three free tuneups.

Chance> And we’ll have you back to the garage in no time flat.

Jake> Aw, Chance! Not the shortcut!

Navigate Night of the Dark Kat