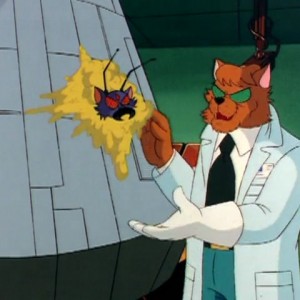 Yes, I understand. I will do everything in my power to help you conquer this world. - Dr. Harley Street

MASA scientist Dr. Harley Street inadvertently brings back the alien Ci-Kat-A and falls victim to their bite, which turns him and others into slaves that begin to mutate into Ci-Kat-A themselves.

It’s up to the SWAT Kats to thwart the invasion, and T-Bone must fight his phobic fear of insects every step of the way. This self-conscious tribute to 1950′s sci-fi thrillers is moderately enjoyable, but it’s undone by the aliens’ lack of personality , compared with the flamboyant Mutilor (from the second season’s “When Strikes Mutilor”), the giant bugs aren’t very memorable. The best things about this episode are Callie Briggs’ brief fight scene with Dr. Street (one of her best heroic moments) and the unusually large role given to Ann Gora (who discovers the alien plot in the first place). B

In-Jokes: 1. “The Ci-Kat-A” reuses locations from two earlier SWAT Kats adventures when the alien leader feeds on energy at Megakat Nuclear Plant (“The Wrath of Dark Kat”), then creates a nest for its new brood in the penthouse of Megakat Tower (“Destructive Nature”). When Callie sees the nest she exclaims, “Not again! This building must be cursed!” MASA Space Center had also appeared briefly in “Destructive Nature.” 2. Speaking of “Destructive Nature,” Mr. Young has a silent cameo here. He and Mayor Manx fare even worse than in the earlier episode, getting covered with alien bug slime at the climax of the action.