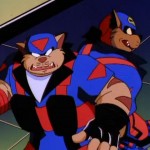 The Dark Side of the SWAT Kats

T-Bone: Well, Razor, you said you that you needed a lousy night to test your new radar. Looks like you got it!

Razor: No Problem, T-Bone! This Dimensional Radar scanner should penetrate other aircraft and buildings with incredible 3D detail. Bingo!

T-Bone: I gotta hand it to you buddy, this makes night flying a snap! Hey! Check out that Enforcer Chopper!

T-Bone: Commander Feral. (via radio) Hey Commander! What are you doing out in a storm? Looking for a donut shop?

Razor: Did you forget to shave this morning, Commander?

Feral: I don’t know how you can see me, but get off my frequency you clowns! This band is for Enforcer business only! (Turbokat buzzes past) Oooooo! You hotshot jerks! One of these days I’m going to…

Razor: What a grouch.

T-Bone: Why don’t you get yourself a nice prune donut?

Razor: Yeah, that outta relax ya!

T-Bone: S’quite a storm, Razor. I can barely see out the cockpit!

T-Bone: (lightning strikes the Turbokat) Awwww crud! Whoa, that was one mega lightning bolt! Everything okay back there?

T-Bone: Oh, that was too close. (weapons fire grazes the Turbokat)

Razor: What was that?!

Razor: I guess he didn’t like our donut joke.

T-Bone: What’s with the Lieutenant? This outta get her off our tail. (Turbokat accelerates out of range)

Felina: Shoot! Ugh… they got away, Uncle.

Felina: Roger that. Heading back to headquarters.

Razor: What was that all about?

T-Bone: I don’t know, buddy. Feral and his niece have totally lost it. You’d think we were criminals or something. (gasps) Razor, somebody’s trashed our place!

T-Bone: I’ve never seen a Glovatrix like this before.

Razor: The alarm didn’t go off and the security seals are intact!

T-Bone: Oh yeah? Then what the heck are those things? And how did they get in here?

Razor: You got me, buddy.

T-Bone: What are these? Huh? A Creepling! (grabs and punches Creepling) Crud! Our place is crawling with Creeplings!

Dark Kat: Why are you attacking my Creeplings? We’re all on the same side, remember?

T-Bone: What are you talking about, Dark Crud? And how did you get in here?

Dark Kat: The same way I always do: the key you gave me.

Dark Kat: Why are you two acting so strangely? Did you get the Mega-Detonator or not?

Razor: Uh… we ran into a little trouble with Feral.

Dark Kat: Feral! He has been a thorn in all our sides! But, I promise you… get me that detonator and I will disintegrate Enforcer Headquarters once and for all!

Dark Kat: No! You’re going to blow it up. With my bomb. Or have you forgotten that Feral has put a price on your heads?

Dark Kat: Well, what are you waiting for? Get to Puma-Dyne and steal that detonator!

T-Bone: (whispers) Razor, what the heck is goin’ on?

Razor: I dunno. Let’s just get in the jet and get outta here! Dark Kat is our friend. Feral and the Enforcers are our enemies, and we’re wanted for every crime in Megakat City. Something’s screwy.

T-Bone: Yeah… ever since we got hit by the lightning the world’s gone crazy.

Razor: You’re right, T-Bone. The lightning must have hit the Dimensional Radar and somehow thrown us into a quirky, alternate dimension!

T-Bone: Hold it, hold it. Are you telling me that somewhere in this world are a couple of evil SWAT Kats?

Razor: You got a better theory?

T-Bone: Okay, we’re negative. So how’s about I find us a nice big storm cloud so we can get hit by lightning and get outta this screwy dimension?

Razor: Excellent idea. But first we gotta stop Dark Kat from getting his claw on that Mega-Detonator.

Razor: Yeah, we’re gonna steal it before our evil counterparts can!

Evil T-Bone: Ah, choke on a furball! You think you could fly any better? (money bag is tossed at him) Ugh, watch it!

Evil Razor: Wanna make something of it?

Dark Kat: What are you two doing back here?

Dark Kat: But the detonator–

Evil T-Bone: Keep your cape on. We’ll get it for ya. But there was a new bank that needed robbing first. (throws money bag at Dark Kat)

Dark Kat: But, I just watched you SWAT Kats fly off to Puma-Dyne!

Evil Razor: Huh? Are you crazy?

Evil T-Bone: Whoever you sent, it wasn’t us.

Dark Kat: Hmm… if it wasn’t you… those impostors must be stopped before they get my detonator!

(Long infiltration sequence. SWAT Kats are content to sneak by guards, while evil SWAT Kats go out of their way to knock them out.)

T-Bone: That was a pretty good workout.

Razor: (out of breath) And we’re not through yet. Look.

T-Bone: Ugh, this could take all night…

Razor: We better split up.

Evil Razor: Watch it you hairy oaf, you almost tripped the alarm!

Evil T-Bone: Stay out of my way, scuzzball.

Evil Razor: Fine with me.

Security Guard #2: (groans and barely manages to activate the alarm)

Razor: Bingo! I got it buddy. Now let’s get our tails out of here before Dark Kat finds out we’re not who he thinks we are.

Evil T-Bone: He already has.

Razor: Oooof! T-Bone, what the… you’re not T-Bone!

Evil T-Bone: Yes I am, but not the one you think. I don’t know what your game is, but it’s up as of now!

Razor: Hi-yah! (flips Dark T-Bone; during the ensuing scuffle, the Mega-Detonator is kicked across the room and out into corridor)

Evil Razor: Did ya find them yet?

T-Bone: “Them?” I thought there was only one detonator.

T-Bone: Oh, yeah. I think I just spotted one. (T-Bone punches Evil Razor; their fistfight merges with that of the other two, with the Mega-Detonator being knocked around several times)

Razor: Won’t Feral be surprised when we turn the Mega-Detonator in along with this kat scum?

Evil Razor: You stupid fool! You’ll blow up the detonator! (Dark T-Bone fires anyway, knocking the SWAT Kats through a wall into another room)

Evil T-Bone: Let’s make sure those two are finished.

Feral: There they are! This time your luck’s run out, SWAT Kats. I’ve been waiting a long time for this. Cuff ‘em, Felina!

T-Bone: You got the wrong SWAT Kats!

Razor: Yeah. The bad ones are getting away!

Feral: Except for you lying SWAT Kats. You’re going to be spending the rest of your nine lives in the slammer. Get ‘em outta here!

(T-Bone and Razor are in holding cells. Feral and Felina, accompanied by the Enforcer Sergeant and several commandos, stand outside their cell.)

T-Bone: Your makin’ a big mistake, Feral. We’re not the SWAT Kats that you think we are.

Razor: Yeah, the other SWAT Kats got away with the detonator, and any second, this place is going to be blown to dust!

Feral: Your pathetic lies won’t save you now, SWAT Kats.

Razor: Listen, Feral. If you don’t believe us, then where is the Mega-Detonator?

T-Bone: Yeah! What do you think we were doin’ at Puma-Dyne anyway?

T-Bone: We were sent there to steal the detonator for Dark Kat.

Razor: Yeah. The evil SWAT Kats got it first, and Dark Kat’s going to blow up Enforcer Headquarters with it!

Feral: Ha! Do you really expect me to believe a story like that?

(The Enforcers leading the holding area, but Feral goes to the runway anyway.)

Feral: (to pilot) Take me to Puma-Dyne!

T-Bone: Great. We’re in some crummy dimension, we’re mistaken for the bad guys, and to top it off, we’re going to get blown to smithereens. What else could go wrong?

Razor: Boy, are we glad to see you!

Evil Callie: You clowns are screwing up our plan to take over Megakat City!

Evil Callie: As if you didn’t know. Oooh. If I didn’t need your help to get that detonator, I’d let you rot in here! One of the perks of being Deputy Mayor. (she unlocks the cell and they all leave)

Dark Callie: Hurry up! Now get that detonator to Dark Kat.

Razor: I can’t believe that Callie is a bad kat!

T-Bone: Guess you were right, buddy. We don’t know who’s good and who’s bad in this screwy dimension.

Razor: One thing’s for sure: we’ve gotta get back to the hangar before those evil SWAT Kats take off with the bomb.

Enforcer Guard: (via radio) Commander Feral, come in! The SWAT Kats have escaped!

Feral: Argh, I should have known it was all a trick. Head back to Headquarters!

T-Bone: That outta answer your question. Listen Feral. Would it do any good to tell you that Deputy Mayor Briggs helped us escape?

Feral: You lying kats will say anything to save your stinking tails.

Felina: (via radio) Uncle, come in. Do you copy?

Felina: (via radio) You’re in pursuit? But I’m in pursuit of the SWAT Kats!

Feral: Impossible! I’ve got the SWAT Kats right in my sights. (Dark Turbokat pursued by Felina’s squadron overshoots Commander Feral’s jet) What the–?

Razor: How do you explain that, Feral?

Feral: Then you SWAT Kats were telling the truth.

Feral: Then… that means…

Razor: You got it! They’re on their way to blow up Enforcer Headquarters.

Feral: The Enforcers will handle this.

Evil T-Bone: Got enough targets back there to hit, Razor?

Evil T-Bone: Next time shoot with your eyes open!

Evil Razor: Oh, yeah? Watch this. This Deadhead Missile is just for you, sweetheart. (fires at Felina’s jet)

Felina: Gah! Can’t see! (Felina’s jet careens toward Goodkat Blimp; Turbokat uses skyhooks to catch her jet and land it atop a building)

Felina: Guess I owe you one, SWAT Kats!

Evil T-Bone: Don’t just sit there, you jerk. Do somethin’.

Evil Razor: What are you doing, you jerk? Let’s just drop the bomb.

Dark Kat: (on view screen) You fools! Don’t chase them; drop the bomb! I’ve spent years waiting for this moment.

Evil T-Bone: Then I guess a few minutes won’t kill ya.

(Turbokat pops up out of bay)

Evil Razor: Crud, they’re back. But not for long.

Razor: Keep the jet steady, pal. I’ve only got one chance to block that bomb. I’m going to cement up those bomb bays before we go.

Felina: Going somewhere, Deputy Mayor? I guess those good SWAT Kats were telling the truth about you, too.

(Turbokat nearly collides with Feral’s chopper and buzzes by, causing Feral to spill coffee onto himself)

Feral: Oowww! You stupid hotshots! One of these days, I’m going to put you two clowns behind bars!

Razor: Well, guess we’re back in our own dimension, buddy.

T-Bone: Music to my ears!

Feral: (via radio) I don’t care how many times you’ve saved this city… I’m going to string you up by your tails!

Note: When the SWAT Kats return to their own dimension and cause Commander Feral to spill his coffee onto himself, look at the expression of Feral’s pilot; apparently, he was also tired of Feral’s grumpy mood and didn’t mind the ‘payback’ the SWAT Kats inadvertently dished out!

Navigate The Dark Side of the SWAT Kats