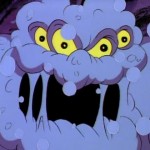 An evil pilot named Morbulus attacks oil refineries, blowing them up, and shooting down pursuing Enforcer choppers, until the SWAT Kats arrive and try to stop him.

He targets another refinery, but, luckily, thanks to a brilliant idea of Razor’s, they manage to take him down by using a Cookie-Cutter Missile to cut a hole in the bottom of his jet (where he can’t see), through which he falls, and they snag him with a claw at the end of a cable, then dump him off in the bay. However, all that is recovered of Morbulus is his empty flight suit. He escapes into the sewers (in his underwear, no less) where he meets the half kat, half snake mad scientist Dr. Viper. On the news that evening, Commander Feral blames Morbulus’s escape on the SWAT Kats, causing an angry Chance to break the TV.

Callie stops over, dropping off her car to be fixed, and then heads back into town to help Mayor Manx write his speech for the grand opening of the city’s new park tomorrow. Meanwhile, Dr. Viper takes Morbulus back to his lab in the swamp, and tells him he needs his help in getting a chemical called Katalyst 99 from Megakat Biochemical Labs. Morbulus, who knows how well guarded the labs are, refuses to help, but he doesn’t have much choice in the matter, as Viper proceeds to apply a drop of purple liquid to his arm, causing him to mutate into a “living test tube”; a huge, oozing bacteria monster.

The next morning, Chance accidentally blows up Callie’s car’s engine trying to supercharge it with an experimental “turbo plug.” Luckily, though, Burke and Murray drop off a load of junk (pausing to mock Chance and Jake before driving off laughing like a couple of hyenas), and Chance finds an engine in the debris that, if given the proper modifications, can go into Callie’s car, and Jake even finds a perfectly good TV to fix the one Chance broke.

Later, on a small farm outside the city, a peacefully grazing cow is attacked and gobbled up by the huge purple bacteria monster that used to be Morbulus.

Hearing the noise, the farmer comes out to investigate, and is eaten as well. The bacteria then proceeds with Dr. Viper into the city via the sewer. Mayor Manx unveils the centerpiece of the new Manx Municipal Park, a huge statue of himself, before the bacteria monster pops out of the sewers and interrupts the festivities.

Callie attempts to kill the thing by hitting it with the Mayor’s limo, but this only causes it to divide into two separate monsters, which proceed to eat the limo after Callie and Manx bail out. They’re rescued by Commander Feral, and then, having seen the whole thing on their new TV, the SWAT Kats arrive. Feral prepares to launch a missile at one of the bacteria, but the SWAT Kats (and Callie) warn against it. He refuses to listen, of course, and the end result is the thing divides again, now totaling three monsters, all of which head for Megakat Biochemical Labs (Dr. Viper picks this moment to pop up from the sewer long enough to laugh evilly).

The SWAT Kats follow them, but one of the bacteria wanders into the subway, and Razor goes after it on the Cyclotron. However, he is too late, as it attacks and eats a whole subway train full of innocent katizens, then comes after Razor for desert. Razor is saved, when the bacteria steps onto an electrified rail and is fried. He returns to T-Bone in the Turbokat, now knowing how to stop the creatures. At Megakat Biochemical Labs, Callie, Manx, and Feral seek help from Dr. N. Zyme, the chief scientist, who correctly identifies the approaching monsters as “giant bacteria,” and prepares a strong dose of antibiotics to use against them.

The bacteria are held back briefly by the huge guns guarding the labs, but they quickly destroy them, allowing Dr. Viper to walk right on into the building.

Dr. Zyme loads the missile containing his antibiotic solution onto Feral’s chopper, and Manx, coward he is, insists on coming with Feral. The SWAT Kats arrive and hit one of the bacteria monsters with their only Megavolt Missile, which fries the thing. Feral hits the final bacteria with the antibiotic missile, and it seems to work, until Dr. Viper arrives and gleefully informs them that his bacteria are immune to antibiotics.

The thing springs back to life and smashes through the window to get Callie and Dr. Zyme, but Feral makes himself useful by diverting its attention. Viper begins gathering up canisters of Katalyst 99 and, just for good measure, he takes Callie hostage. The SWAT Kats lead the remaining bacteria underneath some power lines, which they cut, and the lines fall onto the monster, electrocuting it to death. With that taken care of, they fly back to Megakat Biochemical Labs and rescue Callie. However, Viper isn’t through yet.

He shakes up the canisters of highly combustible Katalyst 99, and throws them, starting a fire. Luckily, they all manage to get out before the flames hit the store of chemicals, and the whole place blows up. The SWAT Kats drop off Callie safely, and Feral bitches at them for cutting the power lines (causing half of Megakat City to suffer a blackout), but they just ignore him and fly home. On the way, they spot Burke and Murray, who are being made to clean up all the piles of burnt bacteria by themselves.