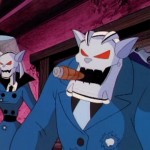 [Fango also says something unintelligible here, but all I can make out is the word “pure”]

Molly: Where did you learn to drive, the demolition derby?

Mac: So I ran a couple a’ stop signs.

Molly: Yeah, and here they all are.

Mac: Look, are we goin’ in, or are we gonna yammer?

Katscratch: Mac? Molly? Is that you?

Molly: Aw, Mac, they remember us.

Mac: They oughta! We used to run this mob!

Fango: Yeah, and what’s with them voices? How come you guys sound so weird?

Molly: We had a complete makeover. Whaddaya think?

Mac: What a shockin’ developement!

Molly: The rest of you lugs listen up! The Metallikats are runnin’ this city, now! And as soon as we finish some personal business-

Mobster #2: Whatever ya say!

Mac: Thanks for your confidance, creeps! But traitors like you don’t fit into our new plans. Molly and I are our own gang now, and we’re dealin’ all of you out!

T-Bone: Thermal sensor has detected an explosion by the harbor.

T-Bone: It’s the tuna factory. Aw, what a waste!

T-Bone: Aahh! What the heck was that?!

T-Bone: Roger that. Fire’s under control. Goin’ in to help casualties.

T-Bone: Which is our cue to split. They can get inside faster than us.

Feral: Ha! The SWAT Kats. I figured those hoodlums had something to do with this.

Ann: And you say the SWAT Kats are responsible for this fire, Commander Feral?

Feral: Absolutely! Alot of you out there may consider the SWAT Kats to be heroes, but I think this wanton destruction proves what criminals those two really are!

Ann: Deputy Mayor Briggs, do you have any comments on this?

Callie: With all due respect to Commander Feral, I don’t think he has a shred of evidence to support his attack on the SWAT Kats.

Feral: Fango! Up to your neck in trouble again, I see. Talk to me, you creep. Did the SWAT Kats do this?

Fango: It wasn’t the SWAT Kats. It was Mac and Molly Mange. They did it.

Feral: You’re crazy! Mac and Molly have been dead for months.

Fango: No, they ain’t dead! They’re some kinda robots now! Callin’ themselves the Metallikats! They’re back from the dead to get revenge! And Mayor Manx is next on their list!

Feral: Mayor Manx? Why him?

Callie: That’s correct. If anyone deserved to spend all their nine lives in jail, it’s those two.

Fango: Then you better tell the Mayor to crawl into the deepest hole he can find and stay there! Bullets don’t stop the Metallikats! Nothin’ stops ‘em!

Feral: Take this trash out of here. Don’t worry your little head, Briggs, the Enforcers will handle this situation.

Callie: And if you can’t, I know two heroes who can.

Jake: Have you seen the paper?

Jake: It’s about that fire we put out. Paper says it was caused by a couple of robots called the Metallikats.

Jake: Chance, it says here the Mayor’s in danger.

Jake: Callie could be in danger, too.

Manx: Ah, there’s too much at stake here. Can’t afford to fail. Last ball, Manx. This one’s for the game.

Enforcer Dispatcher: All units in the area, please respond.

Razor: Got an interesting emergency call comin’ in, T-Bone. Try the police band.

Razor: Could be the Metallikats. Whaddaya say, T-Bone?

Molly: Mac, you are absolutely the worst driver in history!

Mac: I don’t have to drive well in this little hotrod. Everyone else jumps outta the way!

T-Bone: You can forget about supper, too, if we can’t shake this missile!

Razor: It’s like tryin’ to lose your own shadow!

Manx: Feral will hold them. I mean, nobody’s better than Feral, right?

Callie: Let’s hope so, Mayor, for our sakes.

Mac: So sue me! How was I supposed to know that was your sister’s car back there?!

Molly: You always hated my side of the family! Sometimes I don’t even know why I married you!

Feral: Wait for the order, men.

Mac: Knock yourself out, Commander!

Mac: The Mayor’s on the tenth floor. Take the inside route.

Molly: And what are you gonna do?

Manx: No, no! This can’t be happening!

Manx: We’re done for! Nobody can stop those machines!

Callie: Except the SWAT Kats. I hope.

T-Bone: One crisis at a time! Guess it’s time for Plan Z!

T-Bone: No other choice, kiddo. Prepare for engine shutdown!

T-Bone: We’re not outta the woods yet! The engines won’t restart!

Razor: This is why I hate Plan Z!

Manx: I don’t know about you, but I’m getting the heck out of here!

Callie: Mayor, stop! The other robot’s in the building somewhere!

Razor: We have to eject!

Razor: Oh, how did I know you were gonna say that?

T-Bone: C’mon, baby, you can do it! One tiny miracle is all I ask! I thought we bought the big litterbox for sure that time! Ah, but the Turbokat came through for us, just like always.

Callie: I’m in the Mayor’s office, T-Bone, and right now I could really, really, use your help! Aahh!

Molly: Mayor Manx, I was just lookin’ for you!

Mac: Well, well. Look what the kat dragged in.

Mac: Too late, Mayor. You had your chance to make a deal with us earlier, when we offered you a fat bribe for our parole. But ya turned us down.

Manx: Bribe? What birbe? What parole? I swear I don’t know what you’re talking about! But Mac, Molly, please. Life’s just dealt you some bad cards, that’s all. There are good days, and bad days–

Mac: No! You dealt us the bad hand! You don’t get it, do ya? It began two months ago, on Alkatraz Island…

Molly: What about money, and transportation?

Molly: We’d get there faster if you’d help me row.

Mac: Shut up! I hear somethin’.

Mac: I dunno! Can’t see a thing in this soup.

Molly: I’m still alive. What’s wrong with my body? Mac? Mac, where are you?

Mac: Behind ya, Molly.

Molly: Mac, we’re all silvery and weird! What’s happened to us?

Mac: I don’t know, but I’m gonna wring the neck of the guy who did this to us!

Hackle: That would be my neck, young fellow. I think the masks are good likenessess. Eventually, I’ll create full bodysuits for you to wear. No sense scaring everybody every time you go into public.

Mac: Who are you?

Molly: Why’d you do this to us?

Hackle: My name is Professor Hackle. When my robots found you, your bodies were destroyed. The only way to save you was to plant your minds inside my robots.

Mac: We’re robots?! You turned us into tin cans?!

Hackle: I know this is a shock, but in every way, you are faster and stronger. The only differance now is your bodies are steel, instead of flesh.

Hackle: I’ve transferred your memories onto a hard disk.

Mac: I dunno, I think I could get to like this! I’ve never felt so powerful, like I could rip apart this whole town with my bare claws!

Hackle: Indeed you could, my boy, but fate has delivered you to me for another reason. My whole life I have created such weapons of destruction for the military. Laser weapons, rockets, even bombs. However, now I have turned my efforts toward making a contribution to katkind. That is why you two are so important. As soon as you are healed, I will present you both to the scientific acadamy. Imagine the great minds that could be saved with this form of brain transplant. And history will forgive me. Goodnight, children. Sleep well.

Mac: Yeah, goodnight, Professor. Imagine leavin’ us alone to swipe all this loot!

Molly: Yeah, what a sucker! Hey Mac, look at this!

Mac: End of story, end of you!

Callie: Leave him alone, you metal morons! He didn’t turn down your parole, I did!

Mac: And who are you?

Callie: Calico Briggs, Deputy Mayor. Manx hasn’t done an ounce of paperwork around here for years! I turned down you parole, bribes and all.

Molly: You? You let us rot inside that prison?

Callie: That’s right, sister! And I’d do it again in a heartbeat! You don’t scare me, you brass bimbo!

Molly: Remember to land on your feet, Deputy Mayor!

Callie> It’s about time, you guys! Catch you on your lunch hour?

Mac: You never could shoot for beans! Think you can handle the Mayor while I go ather them?

Molly: “Think you can handle the Mayor?”

Razor: I’m gonna get the Mayor, you stay here!

Mac: Hey, I guess we’re better built than I thought. Don’t you know a rust-proof robot when you see one? Party’s over! Aah! That ashtray! The sand jammed the gun, and my parts, too!

Molly: Well, Mayor, any parting words for your fellow citizens?

T-Bone: Jump, Mayor! Jump on the wing! Hey, lady! Don’t mess up my jet! That’s it, right this way. Come on in. I asked you nicely!

Callie: Are you really going to have a SWAT Kat Day?

Manx: Don’t be ridiculous. How would it look if I through a parade for a couple of vigilantes? I wa sjust being polite. Feral! Have this mess cleaned up! Take it to the metal salvage yard!

Jake: Well, there you go, Professor Hackle. Hope you can use the stuff.

Hackle: Oh, yes. Thank you, lads. This will advance my research considerabley.

Chance: Sure, Professor. Glad to help.

Hackle: You two have been very naughty! I’ve been looking for you for days! I’m afraid I’ll have to make some adjustments on you two before I can allow you to be examined by the acadamy.

Molly: Since you’re gonna make adjustments, why don’t you make him taller?

Mac: And her better lookin’!

Hackle: Must you two always argue?

Mac: Hey, Professor, can you make it so she can’t talk?