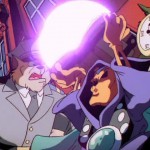 In an old graveyard outside Megakat City, grave robbers Jack and Tom are digging around for valuable artifacts, so that they can sell them to the Megakat City Museum of History. They find an old chest and, thinking there’s treasure inside, Tom pries it open, only to find a small red skeleton in purple robes and clutching a gold pocket watch. Jack is unimpressed, but Tom says the watch might be worth something.

However, as he reaches for it, the figure springs to life! The skeleton announces himself to be the Pastmaster, imprisoned within the chest for 800 years, and proceeds to go in search of his spell book, the Tome of Time, ignoring the grave robbers. Scared, Jack suggests they leave, but Tom says they can sell the Pastmaster to the museum, so they grab their digging tools and advance on the wizard. Finally taking notice of them, the Pastmaster uses his watch to zap a couple of graves, causing their occupants to come alive as skeletal zombies. The zombies grab away the grave robbers’ tools, and chase them away.

The Pastmaster then orders them to start digging and find the Tome of Time, and no sooner have they begun than an Enforcer choppers arrives, its pilots telling the zombies to put down the tools. Getting a closer look, they see the zombies aren’t exactly alive, and blast them to pieces. They land and get out to inspect the scene. They spot the old chest, and decide to take it to the museum. Overhearing their conversation from his hiding place, the Pastmaster concludes he’ll find his book there, so he hitches a ride on their chopper’s landing gear.

Along the way, he marvels at what has been accomplished over 800 years, but longs for the familiar Dark Ages, and decides that once he finds his book, he’ll turn everything back to the way it was in his time. Meanwhile, the SWAT Kats are having a bit of a contest, testing their resistance to G-forces in a centrifuge. T-Bone wins by holding out for ten seconds at Mach 5, while Razor is unable to handle the pressure and blacks out. Coming to, he accuses the boasting T-Bone of cheating, just saying he lasted ten seconds, when he himself could’ve blacked out.

Indignant, T-Bone challenges Razor to a second contest, and its back in the centrifuge for them, T-Bone telling Razor to just admit that he can last longer than him. Razor retorts that he’ll believe it when he sees it. At the Megakat City Museum of History, Deputy Mayor Callie Briggs is talking to Dr. Abby Sinian, the curator, about the new planned exhibits for the museum. The subject changes tot he chest brought in earlier by the Enforcers, and Dr. Sinian says that it’s from the Dark Ages.

Unbeknownst to them, the Pastmaster has slipped inside and is searching for the Tome of Time. He’s spotted by a security guard, who tells him the museum is closed, and attempts to apprehend him. But, the Pastmaster zaps a saber-toothed tiger display, bringing it to life. It attacks the guard, who tumbles back into a dinosaur skeleton, causing it to come crashing down onto him. Hearing the noise, Callie and Dr. Sinian come running. The saber-toothed tiger turns its attention to them, and chases them off down the hall.

The Pastmaster goes into Dr. Sinian’s office, and finds Callie’s purse, and, digging through it, he accidentally activates the communicator. Back at the SWAT Kats’ hanger, the alarm goes off, and T-Bone stops the centrifuge and answers the call but, getting no answer, he realizes something’s wrong. He wakes up Razor, who had blacked out again, and they hop into the Turbokat and blast off towards the museum, following the communicator’s homing signal. Callie and Dr. Sinian run onto the roof, followed by the saber-toothed tiger, just as the Turbokat lands.

The tiger knocks them off the roof, but they grab onto the drainpipe and hang on. The saber-toothed tiger leaps onto the Turbokat’s cockpit, but Razor pops the canopy, catapulting the monster off and into a wall. T-Bone hops out and pulls Callie and Dr. Sinian to safety, but the saber-toothed tiger recovers, and is about to attack, when Razor hits it with slugs from the cement cannon, plastering it to the wall. Dr. Sinian says that only a sorcerer’s dark magic could bring the display to life like that.

The Enforcers then arrive, much to T-Bone’s annoyance. In the hall of ancient manuscripts, the Pastmaster finally locates the Tome of Time, and walks right out the front door with it. He’s confronted by the stern Sergeant, who demands he surrender, but he simply flips through the book and reads a spell, causing a whirling portal above to open, depositing a one-hundred foot tall “Megasaurus Rex” onto the street.

It picks up the Pastmaster and lumbers down the street, ignoring the fire from the Enforcers. The SWAT Kats get back into the Turbokat and fly after them, firing a barrage of Octopus Missiles, but the Megasaurus Rex hits them with its tail, breaking them, and the shards fly back and hit the jet, severing the fuel line, causing T-Bone to lose control and go flying right into the still-open portal.

They are deposited into prehistoric times, and T-Bone makes an emergency landing by the ocean, and as Razor gets out to repair the damage, a pair of plesiosaurs emerge from he water and attack the jet. The SWAT Kats eject in their Ejektor seats, and are suddenly attacked by an entire flock of pterodactyl-like creatures.

Back in the Present

Back in the present, the Megasaurus Rex continues to crush the opposing Enforcers as crowds of citizens flee for their lives. Sitting on the dinosaur’s nose, the Pastmaster thumbs through his book and finds a way to turn everything back to the way it was in the Dark Ages, even as Commander Feral arrives on the scene, and orders that knock-out gas be used on the dinosaur.

His men comply, and, disoriented by the gas, the Megasaurus Rex stumbles into the tar pits and sinks in, becoming stuck. Callie and Dr. Sinian arrive, and tell Feral they need to get the book away from the Pastmaster. Realizing he needs a new mode of transportation, the Pastmaster next summons a flock of pterodactyls, one of which lifts him up off the immobilized Megasaurus Rex’s head, just as the Enforcers throw a net over it. Since the spell must be done from the highest clock tower in the land, the Pastmaster goes to City Hall. Back in prehistoric times, the SWAT Kats still have their paws full with the pterodactyl-like things.

They launch Spider Missiles, which wrap around two of the creatures, and causing them to fall into the water and become easy prey for the plesiosaurs. They then lead the remaining two into the crater of a live volcano; the SWAT Kats withstand the hot air using their gas masks, but the unprotected creatures are overcome and fall into the lava. Heading back to where they left the jet, Razor says he may know how to get the Turbokat working again.

Back in Megakat City, Callie and Dr. Sinian fill in Mayor Manx about the Pastmaster, and so he sends them up to try and negotiate with the wizard. Up on the roof, the Pastmaster is preparing his spell; when the clock of City Hall strikes twelve, all of Megakat City will be reverted back to the Dark Ages! Callie and Dr. Sinian come onto the roof, but the Pastmaster isn’t interested in negotiations. He zaps them with his watch, knocking them back into the hallway, and slams the door. In prehistoric times, the SWAT Kats use gases from the volcano to power the Turbokat and, evading the plesiosaurs a third time, they fly up and back through the time portal.

Mayor Manx tells Feral he has only three minutes to stop the Pastmaster, but the Commander and his chopper squadron are decimated by the wizard’s flock of pterodactyls (Feral himself loses control and crashes right into the Mayor’s office, much to Manx’s dismay), just as the SWAT Kats arrive. A pterodactyl lands on the back of the jet, so T-Bone hits with a huge dose of after burn, frying it. Two more close in on them, so T-Bone does a sharp dive. The pterodactyls try to follow, but lose control and smack into one another.

Unable to withstand the G-forces, T-Bone passes out, but Razor, who for once didn’t black out, wakes him up before they crash. Figuring out the Pastmaster’s plan, Razor fires a missile that lodges into the face of the City Hall clock, between the hour and minute hand, preventing it from reaching twelve. The Pastmaster and his remaining pterodactyl try to pry it free, but the SWAT Kats knock them off the clock tower and into the time portal.

The Tome of Time flies from the Pastmaster’s hands and gets sucked into the Turbokat’s intakes, and is shredded, and the portal closes after the evil wizard. As the bits of the spell book flutter down, Dr. Sinian says she regrets not being able to include the Tome of Time in the upcoming exhibit, but that she’s just glad the Pastmaster is gone…for now. Triumphant, the SWAT Kats fly back home.