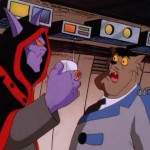 The Wrath of Dark Kat

The following are the most recent posts from a dedicated MegakatCity.com thread for The Wrath of Dark Kat:

I disagree with Feral being power hungry. Yes, he's described that way in the promotional material and there's some evidence of this in the early episodes, but this aspect of his character was dropped pretty quickly and most of Feral's negative traits (outside of the flashback in this episode) were transferred over to Steel.

SwatKatsFan1 wrote:
I think I might know why Feral wanted to take on Dark Kat personally and not allow the SWAT Kats or his ex-Enforcers or his Enforcers to get in the way. It's because Dark Kat might have killed someone close to him probably to gain powers from an evil god or demon. In my fanfic world, Dark Kat murdered Feral's partner Lieutenant Will Weston and Feral felt guilty since he wasn't there that night to save his comrade back when he was a sergeant. Feral ended up having to adopt Will's infant son Jerome who works at the Enforcers Detective division who he doesn't get along with very well which is hilarious.

I'll tell Why ? Feral wants to show everyone that he can Handle super villains by himself

The writing for Callie is just terrible after rewatching this. Not only for how she treats Feral but the Enforcers in general. She basically buries them in the opening by saying the Swat Kats are better.

She is the deputy Mayor. She should have respect for the kats and she kats who put their lives on the line to save the city everyday.

I compare the writing here to two other shows around this time Batman Tas and Gargoyles. Both those shows did a much better job when it came to writing the police officers in the show.

well their jet and the enforcers jet look completely different so even if its used parts, besides it just being better why does it look more awesome? unless Chance saw an older model and gave Jake puppy dog eyes to fix it and use it cuz well Chance is just Chance

Yeah, I imagine the Enforcers are just militarized police.

marhawkman wrote:
Which is weird, because this episode also establishes that the SK jet is made out of "military salvage"... IE the SKs recycling peices of broken Enforcer jets

Are the Enforcers the Military? Because I always thought of them as just the city police. While the military or Army is completely separate. Hence why the Swat Kats have better equipment then the enforcers.

*rewatches episode then types up book*

It's kinda odd but most characters in this episode say things that IRL would make no sense. Callie's overly harsh criticism of Feral for example, but even Dark Kat's megalomaniacal "warning" to not interfere in his theft of the nuclear fuel rods. Even Ann Gora trying to get close enough to touch Dark Kat's ship even after it just wasted a bunch of other vehicles....

But yeah this episode is one of those where it really highlights Enforcer tech as being cruddy compared to that of the villains they fight. Dark Kat's ship apparently has a computer controlled death ray that can hit multiple supersonic targets. Feral certainly tried to deal with the thing, but.... Shooting tanks with pistols doesn't work.

Which is weird, because this episode also establishes that the SK jet is made out of "military salvage"... IE the SKs recycling peices of broken Enforcer jets.

I LOVE the part where Feral berates Steele for gloating! One of the few lines that actually makes sense.

Why hasn't Steele been fired for incompetence yet? Feral's plan was actually rather good.... then Steele just sits back and waits for Feral to die.....

I do like the gimmick Dark Kat used for making his lair hard to enter. You have to fly through a lava fall to get inside! Which only really works if you have a forcefield. Which the SWAT Kats and Enforcers don't.

The flashback.... yeah.... doesn't make a lot of sense. Why did they crash at all? The animation makes it look almost like Feral rammed them to get them out of the way. Which makes no sense at all. But yeah, they come across as hotshot rookies who don't know what they're doing in the flashback. As for why Feral ordered them to back off.... Well it seems logical that if they HAD shot down Dark Kat then Dark Kat's ship would have crashed into Enforcer HQ.

I LOVE what Feral does to Steele after Dark Kat flies off with the finished bomb! "You want my job? This is how you learn it!"

Another fun line: "Just remember; always cut the red wire." Razor looks at the bomb wiring to see that all the wires are red. "Dark Kat you miserable psycho!" AHAHAAAHAHA!!!!! Oh that was awesome.

As for the universe conspiring against Feral... yeah really. Dark Kat did not destroy anything but Enforcer vehicles with his heat ray. It blew up 2 tanks and 3 jets(while moving!) outright, but merely shot the rotor off the news chopper and barely grazed the SK jet while it was hovering.

As for why Feral doesn't recognize them, I think the main reason is that Feral didn't know them very well before firing them from the Enforcers. They came across as arrogant rookies that no one on the Enforcers knew or trusted. the rookie thing was emphasized by how they used "Chance" and "Jake" as call signs on the Enforcers. Then they crashed their plane into the HQ building.....

As for Swatkatsfan1's theory.... It has a grain of truth to it. Feral has an odd habit of flying solo in 2-seat planes.... He doesn't ALWAYS, but.... often enough.

SwatKatsFan1, the whole Dark Kat killing someone as sacrifice for dark powers is creepily true to life for me since a lot of elites are actually into this stuff. 0_o *shudder*

I think I might know why Feral wanted to take on Dark Kat personally and not allow the SWAT Kats or his ex-Enforcers or his Enforcers to get in the way. It's because Dark Kat might have killed someone close to him probably to gain powers from an evil god or demon. In my fanfic world, Dark Kat murdered Feral's partner Lieutenant Will Weston and Feral felt guilty since he wasn't there that night to save his comrade back when he was a sergeant. Feral ended up having to adopt Will's infant son Jerome who works at the Enforcers Detective division who he doesn't get along with very well which is hilarious.

FYI, the reference to a "repeat offender" for Hal Rayle is because I originally posted the review (like the others) to the Agony Booth, a movie review website. It primarily focuses on bad movies and TV episodes. Why post SWAT Kats there? Well, you may notice that the review is... somewhat critical of the show and its various tropes. Much as I adore SWAT Kats, I can't necessarily say it was without its flaws. I love it warts and all, though. And at the time, the Agony Booth was really the only place I could post my reviews of, well, anything. Later, the four reviews as well as others were kindly accepted as guest reviews on Million Monkey Theater, after the Agony Booth rejected mine as too analytical and not funny enough (although the 1991 action movie If Looks Could Kill was the only one I ever actually officially submitted for the site, and didn't just post in the forum)... but the guy running the site later took them all down after a while because he wanted more space for his own reviews, which is fair enough, I suppose, but it was still a little annoying. So it's nice that these are finally being given a permanent home.

I suppose another reason I did it was because I was concerned if someone else did, they'd be unjustly mean to the show; whereas I, being a fan, felt as though I could do it more justice. I guess I'm somewhat protective of SWAT Kats; so much so that if there's any nitpicking and naysaying, I felt best qualified to do it.

...where was I? Oh, right! The site had this thing called "repeat offenders," i.e. actors and actresses who'd been in more than movie or show they'd reviewed. In addition to The Wrath of Dark Kat, I also reviewed the two-part pilot for Darkwing Duck, Darkly Dawns the Duck, where Rayle voices the character Hammerhead and dubbing Mr. Rayle a "repeat offender" was my admittedly sad effort to lend the review a bit more legitimacy as an actual Agony Booth review. I didn't succeed. Not that I really care. I don't go there anymore. I took a long hiatus following the rejection of my review(s) and frankly I just didn't care much for the admins, but I won't name names.

Besides, they're laboring under the very bizarre delusion that Gary Oldman is in the 1998 Godzilla was one of the French secret service guys. Despite the fact that their website is the only place ever to mention this, and all of the actors playing the French guys are credited and accounted for.

Navigate The Wrath of Dark Kat