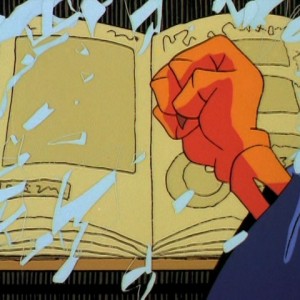 My Tome of Time. Eight-hundred years is far to long to be separated from such power! - The Pastmaster

A magical spellbook that the Pastmaster used to create time vortexes, summon creatures from various eras or to conduct other sorcery. It was used by the Pastmaster to open a portal to the prehistoric world to bring dinosaurs to the present that aided him in his attack on the modern day Megakat City. It also contained a spell that would eliminate the present in favor of the Dark Ages that the Pastmaster was narrowly prevented from completing. In the present, the Tome of Time was destroyed when it was sucked into one of the Turbokat’s intakes, though it still existed in the past and was used by the Pastmaster to attack Megalith City. Queen Callista also used this book to open a time portal to return the SWAT Kats home.