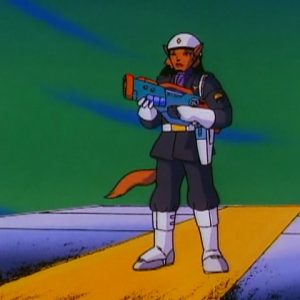 Turmoil’s all female crew of loyal followers who crewed her airship, the Sky-Lion.

In the unfinished episode Turmoil 2: The Revenge, the guards would’ve been revealed to be imprisoned in Alkatraz alongside Turmoil, her lieutenant and the Omega Squadron pilots. After escaping, the resumed their duties, but guarding Turmoil’s base, the Cloud Fortress, instead of the Sky-Lion. When Razor destroys the controls for the Mega-Beam, causing it to turn against the Cloud Fortress, they flee in their gyrocopters along with the lieutenant and the rest of Turmoil’s followers.