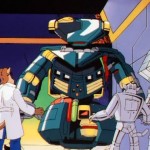 Razor: Three G’s! Sure you don’t wanna… back out?

T-Bone: Razor! Razor, buddy, where are you?

Razor: Up here. Uh, that’s what I get for supercharging the motors. Too much stress on the support mounts.

Razor: Uh, oh… looks like our radar jammer’s totaled! Without this, Feral can track us here easy and blow our cover!

T-Bone: So fix the thing, ace.

Razor: Hey, not without help. I salvaged it from a stealth jet; complex stuff… it could take months to fix!

Enforcer Dispatcher: The Metallikats have broken into Megakat City Mint. All units report.

T-Bone: The Enforcers will never be able to handle those two.

Razor: Then it’s up to us to kick some Metallikat tail!

Mac: It’s like this: you mint money for the banks…

Molly: …and we have to go all over town stealin’ the money.

Mac: We just wanna cut out the middleman. All right! Now I’ll ask you just once: where’s the main vault?

Manager: You’ll never get in! This door is 25 feet [editor: looks more like 12 inches, but what the hey.] of reinforced titanium on a quad-bolted time lock that won’t open for 12 hours.

Molly: But we’re in a hurry.

Molly: DUH! What’d you think I was gonna grab? Ones?

Mac: I was wonderin’ when the law was gonna show.

Molly: Then come and get us!

Cmdr Feral: Let ‘em have it!

Mac: Boy, wait ‘til they get a load of my new Mega-Armament.

T-Bone: Hey, bucket butts, is this a private party?

Razor: Or can anybody join?

Molly: (weakly) Get the loot… you big sap… uhhh…

Mac: Forget the loot. I’m getting’ you outta here!

Cmdr Feral: Where are the Metallikats?

Razor: They got away empty handed.

Cmdr Feral: Yes. And it’ll cost millions more to repair the mess you’ve made of this building!

T-Bone: Gee, for a second there, I thought your uncle was going to thank us for saving his tail.

Mac: A little… recharge is the ticket. C’mon, Molly, say somethin’. Go ahead, insult me. I won’t even get mad!

Mac: Heh, heh! I knew it! Y-you just need to charge up for a while. Relax and soak up some juice. Meanwhile, let’s see if we made the news.

Cmdr Feral: Thanks to the diligent efforts of my Enforcers… and with some minor help from the SWAT Kats… the Metallikats were stopped cold. It’s only a matter of time before we have them in custody.

Mouser: Thanks, Ann. I’m here with Dr Lieter Greenbox. Doctor, what do you have for our viewers?

Greenbox: Well, it’s a little complicated to explain, Tab. Let me show you. It’s a micro-brain repair unit, with universal applications. Allow me to demonstrate on this mechanically impaired clock radio.

Mouser: Incredible! But how–

Greenbox: You see, Tab, every machine is based on a handful of basic concepts. This prototype device is smart enough to diagnose the purpose of any mechanical or electronic object and restore it to its original state.

Mac: Hello!! That thing could patch Molly up in a nanosecond.

Mouser: Amazing! When will this little miracle be available?

Greenbox: In a year, perhaps.

Greenbox: But there’s still a lot of testing to be done.

Mouser: Back to you, Ann.

T-Bone: Wow, did you see that?

Razor: Yeah, maybe we can take this jammer to Greenbox. This high-tech bowling ball with a brain might be able to fix it a lot faster than I can.

Razor: Hey, that’s great, Doc. Thanks! We’ll be right over.

Mac: Looks like this thing could use new brakes. Hiya, Doc! I’ll take that.

Greenbox: No! You can’t.

Mac: Now… let’s see if this little do-dad is all it’s cracked up to be.

Mac: Eh? Woah! Just what the doctor ordered! Molly… this thing’ll fix ya up in no time.

Mac: This little gizmo that the doc made. And from now on, we ain’t leavin’ home without it.

Greenbox: No! That’s my device! I’ve spent years developing it!

Molly: So build another one.

Mac: That thing’s strippin’ our wheels!

Greenbox: Incredible! It absorbed your hovercraft to build an armored body around itself.

Repair Unit: Mac and Molly Metallikat: you are thinking machines more experienced than I. I await your input.

Mac: Are you thinkin’ what I’m thinkin’?

Greenbox: No! It’s my invention! I won’t let you take it!

Mac: The boy’s got a healthy appetite! (laughs sinisterly)

T-Bone: Do you really think that repair gizmo’s going to work?

Razor: Hey, it’s worth a shot.

Mac: Now that you had lunch, let’s go to town, kid!

Repair Unit: This one’s name is not ‘kid.’ Preferred nomenclature is… Zed.

Molly: (matter-of-factly) I think it wants you to call him ‘Zed.’

T-Bone: Uh, what is that thing?

Razor: Giant monster of the week?

Cmdr Feral: Cease your activity at once!

Mac: Hah! This should be good.

Razor: Creepy! We’ve gotta do something. Scrambler Missiles locked… and launched! That outta short-circuit him.

Zed: Negative. Monetary collection holds no interest for Zed. I have other priorities. I must ascertain Zed’s… true purpose.

Molly: He says he ain’t gonna help us.

Greenbox: Oh, my! I never realized my creation could acquire so much power.

T-Bone: Razor, that thing eats everything made of metal.

Razor: Maybe the Mega Laser will stop it. Crud! Nothing can penetrate that tank armor.

T-Bone: Hang on! I’m gonna max this baby out. That was too close, buddy. Now what do we do?

Molly: You’re gonna help me get my Mac back… or else.

T-Bone: Let him go, Molly. Greenbox has nothing to do with this.

Molly: Oh, no? Tell him how your device ate my Mac.

Razor: Zed? That thing is your device?!

Greenbox: The Metallikats stole my invention to repair their injuries. My device’s programming was contaminated with their criminal personalities.

Molly: ‘Contaminated’? Why, you…

Razor: Doctor, is there a way to stop that thing?

Greenbox: Wha… perhaps. But I’ll need a few things from my office at the university.

Razor: We’re gonna need a ride. The Hoverkat will get us there in no time.

T-Bone: What? We’re going inside that metal-eatin’ monster?

Greenbox: It’s the only way to reach the original Zed so I can reprogram him properly with this deactivator.

Razor: But how will we get in? Zed’ll absorb anything metal, like our Glovatrixes.

Molly: Where’s mine? I’m goin’, too; that thing’s got my husband.

T-Bone: Looks like Zed’s stripped half of Megakat City.

Razor: Kat Tracker’s got him. Zed’s heading for Puma-Dyne!

Lt Felina Feral: Uncle, did you hear that? If Zed consumes the high-tech weaponry at Puma-Dyne… crud!

Cmdr Feral: I know, Felina, I know. Attention all Enforcer units: this is Feral. Surround Puma-Dyne. That thing must be stopped at any cost!

Other Enforcer Tankers: Ah! Watch out!

Razor: Look at the size of that thing!

T-Bone: The Enforcers don’t stand a chance against Zed.

Razor: Yeah… guess it’s up to us. Activate force fields.

T-Bone: This is it, Razor. Blast us a doorway!

T-Bone: We’re in! Everybody out! (to Molly) Lucky for you, these force fields work.

Razor: Where to, Doc?

Greenbox: The control unit is about three hundred feet… above us.

Greenbox: Zed is so immense, we’re nothing more than germs to him.

T-Bone: Then those must be Zed’s antibodies!

Razor: Will our force fields protect us against them, Doc?

Razor: No! We’re out of fuel! Deploy grappling cables.

Razor: Zed must have reached Puma-Dyne.

Lt Felina Feral: Nothing can stop him, Uncle.

Cmdr Feral: I know. The best we can do is delay it, until we can evacuate Puma-Dyne.

Lt Felina Feral: Is everything out of there?

Scientist: Almost. The Megabeam is going to take a while to move.

Cmdr Feral: Awww, that’s all I need. When that metal mountain absorbs your satellite…

Greenbox: It’s incredible how much Zed has assimilated in such a short time, though in computer terms, he’s still just a child, you know.

T-Bone: Yeah, and we’re gonna give it a good spanking!

Molly: But only after we get Mac out!

Greenbox: I think I’ve found the heart of Zed.

Molly: Mac? You in here?

Molly: Mac! Hang on, Mac. I’m wastin’ this thing and getting’ you outta here!

Greenbox: Ingenious. Zed has self-preservation capabilities I never even dreamed of.

Molly: Back off, you three! Nobody’s touchin’ this thing ‘til I get Mac outta there.

T-Bone: The coast is clear, Doc. Use the deactivator now!

Greenbox: No. I won’t. Don’t you fools understand? I created Zed. My very genius surrounds us. I won’t let you destroy it.

T-Bone: Yeah, we should have done this mission solo. Let’s get him! That way!

Greenbox & Zed: You’re too late, SWAT Kats. Zed has united with its creator; we are one. Zed has found unity, found purpose.

Razor: T-Bone. The Doc’s merged with his machine!

T-Bone: Too bad! ‘Cause that means we’re gonna unplug both of ‘em!

Greenbox: I think not, SWAT Kats.

Greenbox: There’s the Megabeam laser that Puma-Dyne has been developing. Grab it, then nothing will be able to stop us.

Greenbox: Time for a demonstration. Obliterate that mountain.

Greenbox: Excellent! Megakat City will fall to its knees before us! Reset the Megabeam to full power and target the center of the city!

T-Bone: Quick, we’ve gotta get out of here!

Cmdr Feral: I suppose you’re responsible for all–

Cmdr Feral: Actually, I was thinking about thanking you, but I’ve changed my mind.

Lt Felina Feral: I guess Doctor Greenbox’s invention got out of hand.

Razor: Yeah, with a little help from the Metallikats.

Molly: Mac! Where are ya?

Mac: Over here, move it!

Mac: (vibrating) Aw, come on, Molly! Shut this thing off!