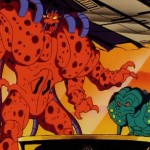 Written by Lance Falk, from a concept by Christian & Yvon Tremblay

Chance: Jake, you’ve been tinkering with these thrusters for days now. Are we ever going to get the new Turbokat in the air?

Chance: So what’s it do?

Jake: If you thought the Turbokat was fast before, wait’ll this baby is operational.

Chance: I can hardly wait to test it!

Jake: Hold your horses, Chance. This baby won’t be ready for two weeks, at least.

Male Beach Kat: I got it! (Distracted by something overhead, he gets hit in head by volleyball.) Oh!

Cmdr. Feral: This is Commander Feral. Cease your operation immediately.

Felina: You don’t really think that thing’s going to turn tail and slink away, do you, Uncle?

Traag: My Lord Mutilor, their squadron leader is attempting contact. He calls himself a “Feral.”

Mutilor: Well, Traag, let us greet them in the tradition of brotherhood and galactic peace.

Felina: One down, nineteen to go…

Cmdr. Feral: Don’t thank me yet; we’re still outnumbered. What?!

Cmdr. Feral: There’s too many of them. This is Feral. Return to base!

Mutilor: Look, Traag, the cowards are retreating. Now we can resume draining this moirture-rich world.

Traag: The desert planet Saharbi will pay handsomely for the water we steal this day. Heh, heh.

Mutilor: Ha, ha! And if this world perishes in the process, it’s just business. (laughs)

Chance: The Enforcers have taken their best shot, buddy.

Chance: But we don’t have our jet.

Felina: I may be down, but I’m not out. Eat bazooka, you space scum! Aaah! (gasps) The SWAT Kats!

T-Bone: Here they come, Razor, ready to rock and roll.

Razor: What was that?

Mutilor: Heh, heh. Is this the greatest challenge this puny planet can offer me? Time to fry these insects!

T-Bone: If we get it airborne in time.

Razor: If we don’t, Megakat City’s gonna be bone dry.

Mutilor: Heh! No. And we owe its destruction to these peace-loving Aquians.

Grimalkin: Return my ship at once, Mutilor!

Grimalkin: Only because you stole it from me and my crew, you pirate!

Traag: Watch your tongue, insolent one!

Mutilor: He’s right, Traag, we are pirates. (laughs) And with this ship, I’m going to drain every drop of water from this world before its sun sets!

Felina: Freeze! You have the right to remain… (notices pilot is slumped unconcsious over controls) …silent?

Razor: We coulda used another week to get these systems operational.

T-Bone: We’ll be lucky if we have another hour!

Manx: What’re we goin’ ta do, Callie? The city’s water supply is gone. Where are the SWAT Kats? (blubbers)

Callie: I don’t know, Mayor Manx, but I’m sure they have a plan. Excuse me. Razor, T-Bone, where are you?

Cmdr. Feral: Felina… Rrrrr! Let’s kick those aliens out of our atmosphere!

Traag: It won’t be long now, Lord Mutilor. This world is nearly drained.

Mutilor: Put it on the screen.

Traag: I thought we destroyed those two!

Mutilor: Well, well. Looks like someone on this pathetic planet has claws after all. But they will be clipped. Deploy Marauders!

T-Bone: She’s handling better than ever, buddy. Let’s just hope that you can handle them.

T-Bone: Yes! Three down, seven to go. [There are actually nine Marauders left at this point.]

Razor: I can improve those odds. Drop Tops… deploy! Crud! Looks like we got our first ding. Oh, that makes me mad! Matchhead Missiles… deploy!

Mutilor: Pull this ship to a higher altitude. We can finish operations beyond the range of these… pests.

Razor: T-Bone, they’re getting away. Step on it!

Razor: Unless you try the Speed of Heat.

Razor: There’s only one way to find out.

Enforcer Pilot: Commander, they’re moving out of range. There’s no way we can follow to that altitude!

Cmdr. Feral: But somehow, the SWAT Kats are. (to self) Guess it’s up to them now…

Traag: They’re giving up. Excellent move, Lord Mutilor. We’re receiving a transmission… must be the Saharbi.

Saharbi: Congratulations, Mutilor. I hear you have water for us.

Mutilor: Yes, if the price is right.

T-Bone: I hope we don’t come apart before we get there.

Razor: Just worry about your landing. I don’t want to have to rebuild this jet again! Don’t cough up a hairball, Razor. See, what’d I tell you? We made it without a scratch.

Razor: Oh, I wish you hadn’t said that…

T-Bone: Come on! We’ve gotta find the control room on this ship and get our water back.

Alien Guard: (coughs twice) Those Kat pilots are here. (coughs once) They just took out my best unit!

Mutilor: Just find them… and destroy them!

Mutilor: Those two will be sorry they ever set their tails on my ship.

T-Bone: Now, tell us how to get to the control room.

Grimalkin: (voice over) Maybe I can help you.

Razor: Who are you?

Grimalkin: Captain Grimalkin. This ship really belongs to me and my crew, but Mutilor and his space pirates stole it and imprisoned us.

T-Bone: Sounds like we could help each other. Stand back. We’re gettin’ you outa there!

Razor: Amazing! I can’t believe all of our water can fit in this ship.

Grimalkin: Yes, our advanced technology enables us to condense your planet’s water for intra-galactic transport. Come, the bridge is this way. From there you can reverse the process… if you’re not too late. We would help, but combat is not our way, warrior.

T-Bone: Hey, I can respect that, but we’ve got to get your ship out of Mutilor’s hands. He’s destroying our world!

Grimalkin: Perhaps you’re right, but we will not help you fight.

Razor: Suit yourselves. Just point the way to this Mutilor; we SWAT Kats will deal with him.

Mutilor: (voice over) You’re welcome to try, SWAT Kats! (laughs) So much for your brave Aquian allies! My guards will round them up presently. You two are a different matter. I’m almost sorry you won’t live to see me drain your planet dry as a bone.

Mutilor: So much for those feline pests. Traag! Prepare course for Zarhabi. We have a rich cargo to sell.

Callie: (voice over) I know, Mayor.

The chopper flies over a few beached cargo ships & tankers.

Callie: (voice over) Without water, our planet is doomed.

T-Bone: (voice over) Not so fast, gruesome!

Mutilor: What?! How can this be?

Mutilor: Finish them! Attack! All of you!

Mutilor: Heh, hmm, hmm… It was so refreshing to clash with true warriors. It’s a shame I must destroy you. I will make your demise painful, but quick.

A Marauder suddenly crashes through the wall into the deck.

Razor: (incredulously) What the…?

Felina: Sorry I took so long; I’m not used to flying a saucer. Did I miss the party?

T-Bone: (standing up) Nope! It’s just getting warmed up.

Mutilor: You fools have cost me a fortune! I will knock you from the sky and destroy all of you!

Razor: What’s he got up his sleeves?

Razor: The biggest one ever. Our whole planet will probably bust up!

T-Bone: Come on! Looks like Felina and the Aquians can handle things here.

Razor: If I were Mutilor, I’d strike from as far away as possible, ‘cause when this mothership hits, our atmosphere is gonna go ka-blooey!

T-Bone: I hear ya. Switching to sub-orbital mode, now!

Mutilor: What?! How many lives do these Kats have?

T-Bone: Razor! You’ve gotta put that mega-beam laser out of commission, before he takes us apart.

T-Bone: You’re gonna have to do better than that, buddy…

Razor: That’s what he thinks…

Mutilor: Now, you can watch as I destroy the ship, and your world. (laughs)

Razor: Lousy shot… I’ll be buffing out the dings for weeks!

Grimalkin: (voice over) Your planet’s water will soon be fully restored.

Grimalkin: No, it is we Aquians who should thank you, for giving us back our ship. But perhaps we can repay part of our debt. Come.

T-Bone: So, Lieutenant, want a ride in our new jet?