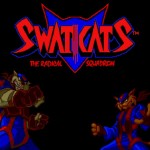 As its name intends this world features Madkat, the villain of the episode Enter the Madkat.

This world pretty much follows its own storyline as Madkat has opened an amusement park called Madkat Land, luring the kids of Megakat City inside and trapping them there. The enemies in this world are mostly toy alike creatures. During the boss battle Madkat changes into a giant ball each second time he is hit which is probably an homage to the single episode he appears chasing Mayor Manx as a giant ball.

When the fight with Madkat starts you should position the SWAT Kat between the second and third mirror as the chances are probably best to evade a hit by a mirror shard when Madkat jumps out of one of the mirrors.

Don’t get too close to him while he floats in the air as he’s gonna teleport to the opposite end of the stage otherwise. You can only hit him while he’s standing on the floor for a short time. It’s best to duck while doing this as he’s gonna throw a spiked dice into your direction. Once hit, he throws a small ball at you which you should try to evade (unlike me in the video most of the time) or shoot at it. When Madkat is hit he disappears and you have either to evade his giant hands or his manifestation as a giant ball. In the first case quickly go to the right part of the stage and duck in order to avoid colliding with his hand. Then quickly repeat the procedure on the left side. After that, go to the middle of the stage and wait until the hands lift up. Then run away from there quickly. When Madkat transforms into a giant ball simply keep your distance from him. When you’ve reached one of the stage’s corners run into the other direction while Madkat is being in midair. Repeat this until the fight is over.