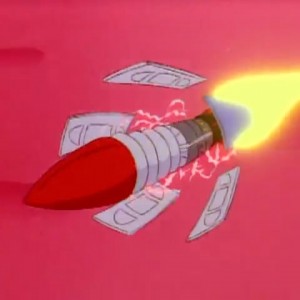 An electrically charged, high voltage missile, used successfully against one of Dr. Viper’s Giant Bacteria monsters. The missile sent a surge of electricity into the target, causing the Giant Bacteria to incinerate. The missile was employed due to conventional explosives being ineffective against the creatures, as explosives would only divide and multiply them. It is possible that the Megavolt Missile is an early prototype of the Scrambler Missile.