An In-Depth Analysis by Kooshmeister

Picture if you will, me as a young boy in 1993 watching, for the first time, an action cartoon with talking cats. I’d come into the room and found my sister watching it on TV. I asked what was happening and she filled me in: it was called SWAT Kats, there were these two cats in a jet and they were chasing a guy with eyes in the back of his head. I sat down to watch. The rest, you can probably imagine. I was never the biggest fan. If it was on, I watched it. It was only after high school that I really began to appreciate the series beyond a simple diversion.

Over the ensuing years, especially into adulthood when I became re-interested in the series, SWAT Kats was difficult to see, at least in any appreciable condition. Videotapes and so-so video files online were about it apart from the occasional rerun on Cartoon Network, and later Boomerang. Most fans shared the same sentiments: we wanted SWAT Kats on DVD, and we wanted it now. Well, it has finally happened. The Warner Archive has seen fit to unleash SWAT Kats to DVD. But is it worth the wait? And the price? Should you get it?

Should you get it? 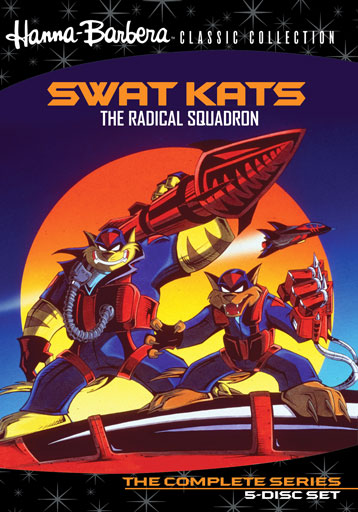 The first question is, for me, yes. SWAT Kats on DVD in any form means more recognition for the show. The other questions are ones only you can answer. However I hope to help you come to your conclusions by providing my own thoughts on this DVD set and also address some concerns that have been cropping up on various forums about the quality of the video, especially on swatkats.us, where some have expressed preference for the Boomerang recordings.

First off let’s get one thing straight: this isn’t really a DVD as such. At least, not a mass-market one; it is a DVD-R, made by Warner Archive on demand. Meaning that when you order it, the copy you are sent is the one burned for you and you alone (or at least for that order alone). These don’t sit in boxes in a warehouse. As a result there may be some player issues associated with DVD-R such as difficulty playing on conventional DVD players but so far I have experienced no problems, and most people shouldn’t.

It’s about as good as SWAT Kats is ever going to look. The colors (especially on second season episodes for some reason) are a bit muted and washed out in some spots, compared to the Boomerang airings, so that complaint is legitimate. However, besides this, the episodes look fantastic and vibrant, especially the reds. The image is crystal clear, with sharp lines and detail. It’s so detailed, in fact, you can make out animation flubs and little mistakes here and there, which is unavoidable with DVD’s of older movies and shows, unfortunately; the price for better visual quality is that it often exposes otherwise invisible flaws in the original animation. But SWAT Kats was never perfect anyway, so this doesn’t wholly bother me nor ruin the experience.

Speaking of flaws, although Warner has used some very crisp original masters of the episodes, they didn’t bother to clean them up. This is especially evident on the older episodes. Scratches and specks and other imperfections in the film are seen here and there, however, they’re usually for only one frame or two and go by very quickly, and are almost always flaws on the original film, and therefore not necessarily Warner’s fault, even if they could have cleaned up and remastered the episodes, although that was, in my opinion, far too much to ask for. That it looks even this good despite Warner clearly not doing much to properly clean it up is amazing.

So, there you have my final word on the visual quality. In some ways great, in others only mostly somewhat good. A mixed bag, pretty much. But it is the sound where the DVD surpasses everything I could have hoped for, oddly enough. Older TV recordings of the series tended to make everything but the dialog and music audible. The DVD’s soundtrack is so clear and static-free you can hear the Pastmaster’s watch chain jangle, the water dripping in Dark Kat’s volcano lair, and when Chance snaps Murray’s pencil in The Giant Bacteria, it’s like somebody is standing right there breaking a pencil (especially if you’re watching it on your computer listening with headphones!). So where the DVD falls slightly short in visual representation, it is absolutely stunning in the audio department.

There are no extras, really. Special features aren’t Warner Archive’s thing, especially with made-on-demand rather than mass produced discs. But there are still a few new things to be found, a few little surprises that nobody else really seems to be touting for some reason, and I guess only fans will appreciate their being mentioned here.

Further, every episode has the fade-in/fade-outs for their commercial breaks restored, and the footage used therein included. Now, each episode fades out and then fades back in at the proper point and with the proper cliffhanger shot(s).

It isn’t all good, though. As wonderful it is to have these missing bits of footage returned for all to see, I cannot quite call these the definitive, complete versions of the SWAT Kats episodes. First up is the problem of the end credits. Most episodes use either the end credits from The Metallikats or A Bright and Shiny Future. Razor’s Edge and Cry Turmoil / SWAT Kats Unplugged have their proper credits, though. I no idea why this is. How could Warner get uncut versions of the episodes without consistently including the individual episodes’ proper end credits?

Another complaint is that rather than having the four “shorts” – SWAT Kats Unplugged, Cry Turmoil, Volcanus Erupts! and The Origin of Dr. Viper – put together as two episodes the way they originally aired, the DVD splits them apart into four episodes unto themselves. This is only a minor annoyance. The true crime is recycling the end credits for the wrong episodes, meaning voice actors either aren’t credited for episodes they were in, or are credited for ones they weren’t!

UPDATE: The re-release of the DVD set has corrected the problems with the end credits.

This is not a perfect release. Definitely not the ultimate DVD release many fans have been waiting for. But for me, personally, the good outweighs the bad and I think that for the time being this is a pretty stellar presentation of SWAT Kats. So if you don’t mind the high price and the fact the episodes have some nicks and scratches here and there (not to mention the unforgivable flub with the end credits), then by all means give this DVD-R release a go. Speaking personally as a longtime SWAT Kats fan I am not disappointed.