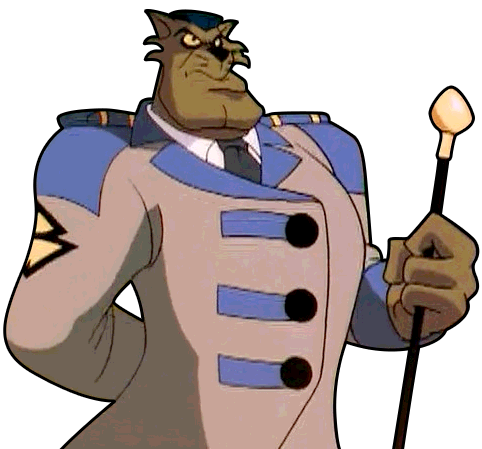 With all due respect, Deputy Mayor, your SWAT Kats are a menace. They belong in a cell, right next to Hard Drive.

Commander Ulysses Feral is the by-the-book, well-intentioned leader of Megakat City’s paramilitary Enforcers who are tasked with defending the city against a host of threats.

Oftentimes uncompromising in his outlook towards criminal activity, Commander Feral has no time for what he deems reckless hotshot vigilantes, like the SWAT Kats. This has frequently put him at odds with Deputy Mayor Callie Briggs, who has made her support of the SWAT Kats no secret.

This, in addition to his blatant dislike of Mayor Manx (calling Manx a coward and a fool on many occasions), has often forced Feral to stand alone. While he has occasionally put out notices to arrest the SWAT Kats, Commander Feral isn’t blind to their actions in saving Megakat City, and is mostly content to allow them to leave the scene and lambast them to the media.

A lean, tough, by-the-book police veteran, Commander Feral displays his militant, power-hungry ways to prevent anyone from going around him. However, the SWAT Kats go around, up and over him. Furious that the SWAT Kats always end up doing his job, Feral boils over seeing his Enforcers look bad against Megakat City’s many villains.

Commander Feral has frequently and publicly advocated for the arrest of the SWAT Kats, frequently labeling them as lawless vigilantes who cause more harm than good. Feral has even gone so far as to put out an APB for their arrest on at least one occasion, though Deputy Mayor Callie Briggs cited Feral’s potential embarrassment and bruised ego as his motivations for doing so. Despite this, Feral just as frequently also allows the SWAT Kats to leave the scene undeterred if they’ve just helped capture a dangerous criminal. Feral’s devotion to the law overshadows his rivalry with the SWAT Kats, as was shown when the Metallikats offered to reveal the identities of the masked duo if Feral would let them go free, which Feral adamantly turned down.

"I should throw that niece of mine off the force! But my brother would never speak to me again. And she’s too good an Enforcer!"

Commander Feral has an unnamed brother, and his niece, Lt. Felina Feral, is shown to be a part of the Enforcers during the show’s second season. Due to her headstrong actions and occasional disregard for orders, Commander Feral has stated he would remove her from the force, but his brother would never speak to him again.

"Actually, I was thinking about thanking you, but I’ve changed my mind."

As the series progresses, Commander Feral’s tolerance of the SWAT Kats visibly increases, going so far as to begin giving them some credit during press interviews and even almost thanking them at the end of the show. They have been shown to work together when the circumstances demand. Unbeknownst to Feral, one of the primary reasons the SWAT Kats dislike him is because he was responsible for throwing them off the force when they worked for him as Enforcers. The unorthodox threats that arise in Megakat City often result in Feral’s inadequacy to defend Megakat City alone, and is the biggest point of contention between him and other characters, though there have been specific instances where Commander Feral’s personal interventions have helped save the day.

Feral isn’t shown to have much of a personal life, let alone any romantic interests. His apartment does however feature a football trophy, suggesting he once played sports, as well as a stereo system, suggesting he enjoys listening to music. His exact taste in music is unknown, although he did attend a performance of “The Fur Seasons” with wealthy heiress Katrina Moorkroft in the unfinished episode Succubus!, suggesting he enjoys classical music.

Feral was originally going to be the one Turmoil fell in love with in Lance Falk’s original script for Cry Turmoil. As written by Falk, Feral would’ve been fired from his job as the Enforcer commander by Manx after failing again, and he would’ve thrown in his lot with Turmoil and her crew. Unlike T-Bone in the finished episode, Feral’s turn to evil would’ve been genuine. He would’ve turned against Turmoil at the end of the episode when she lost, claiming he’d been pretending the entire time, when in reality he’d only betrayed her to save himself. The episode would’ve shown a darker side to Feral’s personality.

In the unaired episode Succubus!, Feral falls in love with Katrina Moorkroft, a wealthy heiress. He doesn’t notice he’s begun to drastically age at an accelerated rate the more time he spends with her. However, Felina does, and she discovers that Katrina is in reality an evil succubus. Feral refuses to believe her, and even plans to propose to Katrina. But Katrina transforms into her true form and tries to fully drain Feral, however he is saved by the SWAT Kats and his niece, and reverts back to his normal self in the hospital.

In another unfinished episode, Turmoil 2: The Revenge, Feral would’ve been revealed to carry a code red “doomsday key” as part of his duties as Enforcer commander. Mayor Manx carried an identical key. The two use them to fire surface-to-orbit missiles at the Mega-Beam after Turmoil gained control of it, but the attack fails. When Turmoil demands $50 million in gold personally delivered to her by T-Bone to prevent further attacks (having already destroyed both Megakat Tower and Old Megakat Bridge), Feral, a pragmatist, advises against paying. “Once the blackmail starts,” he warns Manx, “it never stops!” Nevertheless, when Manx agrees to Turmoil’s terms, Feral grudgingly obeys. He is proven correct when Turmoil later demands a second payment of $100 million. Fortunately, the SWAT Kats defeat her before the city is forced to pay her a second time.