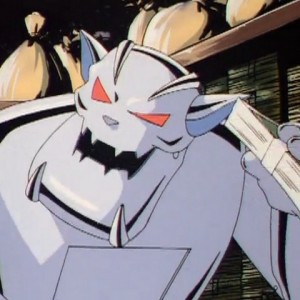 I dunno, I think I could get to like this! I’ve never felt so powerful, like I could rip apart this whole town with my bare claws!

Sent to Alkatraz along with his wife for his role in the criminal underworld Mac and Molly Mange managed to escape from the island prison only to drown in the process.

Their bodies washed up on the on the shore of Professor Hackle’s private residence, who transferred their brainwaves onto a hard disk and implanted them into artificial metallic bodies.

Using their new and improved abilities the couple took on the name “Metallikats” and proceeded to weed out their former associates, thus becoming the number one gang in the city.

A horrible driver with a disposition to match, Mac is constantly at odds with his wife as the two continuously bicker relentlessly with each another.