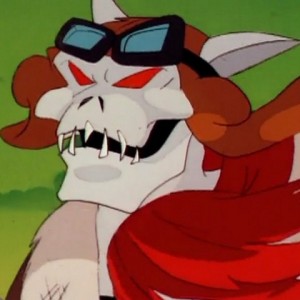 Yeah, he was a bad guy, but he was also the baddest pilot around. - T-Bone

Known as the most evil pilot in history, the Red Lynx dominated the skies during Megawar II, shooting down all that dared to oppose him. It wasn’t until the debut of the Blue Manx did this pilot ever get shot down.

The Blue Manx, great grandfather to Mayor Manx, was made famous for his actions that day, and the Red Lynx was apparently killed in the crash. Many years later, Abner Doolittle, a worker as Megakat Harbor fished out the Red Lynx’s bi-plane from the murky depths, and brought it ashore. The plane was transferred to the Megakat Museum of History, where it was put on display in the aviation section. Then, one moonlit night, the spirit of the Red Lynx manifested, and took off in the bi-plane, seeking revenge, and vowed to take it on the Blue Manx’s only living descendent, Mayor Manx.

The only way to stop this avenging spirit would be for Manx to shoot down the ghost pilot. After much aerial dog fighting with the SWAT Kats, the Red Lynx was presumed shot down, but this was short lived, as he stole the new Enforcer jet prototype “The Blue Manx”, and used it to try again to take out Manx. With the aid of the SWAT Kats, Mayor Manx was able to shoot him down on the cyclotron, while T-Bone distracted him in the Turbokat, silencing his ghost for eternity, or, until he resurfaces again…

He was also voiced by Mark Hamill, who also voiced the Skeleton King on Super Robot Monkey Team Hyperforce Go.

Mark Hamill was also the actor known for Luke Skywalker from Star Wars A New Hope, Empire Strikes Back and Return Of The Jedi movie.

The Red Lynx, AKA The Ghost Pilot, really is a jet pilot’s worst nightmare for being on the wrong side of MegaWar II and the baddest pilot in history, second only to The Blur Manx, but I also think that he would also be really shocked and disappointed to see that a descendant of his own blood–his great-great-grandson named Hans Lynx from SWAT Kats: Nova Squadron created by Aerokat and Felony–has become a member of the SWAT Kats team as his alter-ego Crimson to help T-Bone, Razor, and the others fly the Turbokat and always keep on protecting Megakat City.