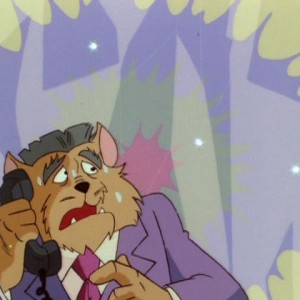 The Warden? Meece is the only one gettin' rich off this mine! - Rex Shard

Warden Cyrus Meece was the warden of Megakat Maximum Security Prison whose greedy exploitation of his prisoners in order to get wealthy ultimately led to his undoing. Meece instituted a new work program wherein inmates of the prison could shave time off their sentences by digging for diamonds in the nearby mines. He hired Dr. Lieter Greenbox to build the Gemkat 6000 in order to speed up gem production, but the device was horribly flawed. After his accident, Rex Shard immediately proceeded to the prison and crystallized Meece with his deadly crystal touch. Meece was then knocked over by a clumsy Greenbox, shattering into hundreds of fragments on the floor.