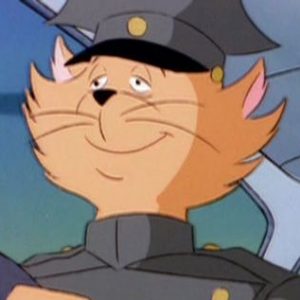 Hurry, driver. I don't want to be late for tee-off. - Mayor Manx

The chauffeur is the driver of Mayor Manx’s limousine. He is very thin, beady-eyed with a slightly upturned muzzle, giving him a somewhat snooty appearance. He says little and does as he’s told and seems to be a dependable driver. His name hasn’t been revealed; Manx only ever calls him “driver.”

He drove Manx to the site of the Megakat Refinery following (they thought) the capture of Morbulus, opening the door for him. Later, when Deputy Mayor Briggs had to take her car to Chance n’ Jake’s Garage, the chauffeur followed her in the limo (presumably without Manx) and then took her back to the city.

He later drove the Mayor and Deputy Mayor to their inspection of the Megakat Maximum Security Prison, and, when Manx left to go and attend the Manx Invitational Golf Tournament, Manx expressed concern that he’d be late for tee-off. The chauffeur reassured him it’d be a short drive. It’s unknown if he got turned to crystal along with everyone else at Megakat Springs, but if he did, he was later returned to normal.

During the Ci-Kat-A incident, he took Manx to the airport to pick up Mr. Young, driving them to the Megakat Tower. A giant Ci-Kat-A (its wings having been tied by the SWAT Kats) landed in front of them, and the chauffeur, Manx and Young covered their ears as the creature’s piercing shriek broke the glass of the windshield and windows. When the bug was crushed by a falling chunk of debris, all three of them ended up drenched in its innards, forcing a disappointed Manx to say, “Back to the airport, driver…”

During Dark Kat’s plan to capture the SWAT Kats using the Mayor and Deputy Mayor as bait, Mac Mange impersonated Manx’s chauffeur. When pressed, he simply replied, “He’s out sick.” The chauffeur’s fate after this is unknown. Although Manx’s limousine continued to appear, its driver was never actually seen again.

His uniform color also changes. In The Giant Bacteria, it’s blue, but in Chaos in Crystal and The Ci-Kat-A, it’s gray. And although he himself doesn’t appear, in Katastrophe, the uniform Mac is wearing, presumably stolen from him, is back to being blue.