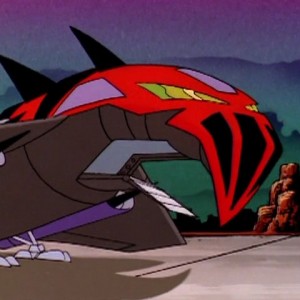 Protected by a nearly impenetrable force field and highly destructive heat blasters, the Fear Ship (nicknamed “the Doomsday Express” by Dark Kat) was used to great effect by Dark Kat to steal radioactive fuel rods from the Megakat Nuclear power plant in order to construct his Doomsday Device.

This nuclear weapon could then be carried by the Fear Ship and deployed against its target: Enforcer Headquarters, and by extension, Megakat City. This aircraft featured a large payload capacity, able to carry a large complement of Creeplings and other assorted cargo.

The Fear Ship’s most notable asset was its force field generator, as it made it impervious to conventional attacks, making it an ideal aircraft to carry out its primary purpose of delivering a nuclear payload against heavy Enforcer resistance.

The force field had to be lowered to allow ingress and egress of passengers and cargo, a fact Commander Feral made use of during his successful attempt to sneak aboard. Ultimately the force field was brought down by one of the SWAT Kats Scrambler Missiles, which made it vulnerable to conventional weaponry, whereupon it was shot down by T-Bone in the Turbokat.

The Fear Ship was able to successfully deploy the Doomsday Device over its target, though due to the actions of Razor, the bomb was disarmed mid-air before impact. Unlike its speedy predecessor, the Fear Ship, the Doomsday Express appeared to rely entirely upon its defenses, as its airspeed was easily matched by both the Turbokat and Enforcer Jets.

Showing images 1 through 24 of 29 total images.