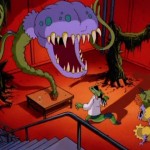 Manx: At three-hundred stories, Megakat Tower is the tallest, most modern office complex in the whole city!

Callie: Greed brings out the best in you, Mr. Mayor.

Callie: He sunk most of the city treasury into this place, but that’s off the record.

Ann: Gotcha, and thanks again for giving me the exclusive, Callie.

Manx: Now, why don’t we continue this meeting at Megakat Golf Course? We tee off in ten minutes!

Young: So close to the golf course? This is an excellent location!

Manx: That’s what I’ve been tryin’ to tell you! Right This way, gentlemen!

Jake: Well I’m tryin’ to save this place from the smell of sour milk.

Chance: So that’s what all this plant business is about.

Chance: Hey! But not so good for my game score. And I was goin’ for a personal best, too!

Jake: There’s always another universe to save.

Ann: Today, only a few potted plants occupy the Megakat Tower, but when it opens next month this place is guaranteed to be a bustling business center! This is Ann Gora, Kat’s Eye News.

Callie: And this is Callie Briggs, klutz. No, it couldn’t be!

Ann: Get some good shots of the courtyard. What the–?!

Viper: Thanks to my growth formula, this building is now impenetrable! But I count on you, my creations, to protect me from Feral, his Enforcers, and most of all, those meddling SWAT Kats!

Callie: It is Dr. Viper!

Viper: Soon, this foul city will be one giant, glorious swamp!

Callie: I’d better get some help!

Callie: No way out! Not connected yet!

Callie: At Megakat Towers! And this time he’s got an army of plant monsters to–

Enforcer Commando: According to witnesses, Commander, this stuff just sprang up in minutes! But it’s gonna take a week to cut through.

Feral: Not if we burn our way in!

Feral: Briggs? That figures. Get the choppers ready, we’ll take the tower from above!

Feral: Weapon systems gummed up! Viper? Should’ve known that crazy lizard would be behind this mess!

Viper: Run, Feral, you fool. Because there’s nothing you can do to stop me!

Viper: Save your breath, Miss Briggs! My plantimals obey only me. Besides, you don’t want to run away and miss out on all the excitement!

Callie: What is that thing?

Viper: My spore pod? Why it’s going to explode! And at this height, it’s beautiful spores will cover the entire city! I can see it all now. A spectacular new Megakat City. No more ugly metal and plastic, only beautiful swamp, ruled by me! Dr. Viper’s Megaswamp City! It will be so beautiful!

Callie: Wake up and smell the coffee, Viper! Here come the SWAT Kats!

Viper: Attack them, my little pets!

T-Bone: We’ve got some plug-ugly company!

Razor: Piranha Missiles, away! T-Bone, those things melted my missiles!

Viper: Attack! Destroy the SWAT Kats! You see, Ms. Briggs, my armies are endless! She’s gone! You fool, you let her escape!

T-Bone: Say again, Razor? You must be jokin’!

Razor: I said, I’ll penetrate the building, and come up on Viper from underneath!

T-Bone: That’s a negative, Razor. Plants are takin’ over the whole building or haven’t ya noticed?

Razor: Affirmative, but Callie’s in there, T-Bone!

T-Bone: Right. Maintain radio contact at all times, do you copy?

Razor: Looks like a swamp in here, but so far so good. What’s your situation?

T-Bone: It’s weird. Those flying cabbages don’t attack me unless I’m close to the roof.

Razor: Just keep away from ‘em. I’ll call ya when I find Callie. Don’t like the look of this. Chew on this! I don’t believe it!

Ann: Commander Feral, do you have a plan for getting Deputy Mayor Briggs out of there?

Feral: Yes, a simple one. We’re going in! Fire!

Enforcer Commando: That did it, Commander! We’re through!

Feral: Let’s move in! Blast it!

T-Bone: Looks like Feral got stopped at the door.

Manx: What?! Excuse my clumsiness! You play through, I have to make a phone call. Get me Feral!

Viper: Soon, my lovely, soon! Let those fools waste their time. In fifteen minutes, Megakat City will be mine!

Enforcer Sergeant: The toughest tanks we have, and that–that thing melted ‘em like butter!

Feral: Now you listen to me, Mayor, Dr. Viper has turned your pet skyscraper into a living weed patch, and-

Manx: No, you listen to me, Feral! The city has a billion dollars sunk in that tower. Use weed killer if you have to, but get that wacko Viper out of there now! And don’t damage the building doing it!

Manx: Don’t do it, Feral! My friends here are about to sign a ten year lease!

Young: Is there a problem, Mayor Manx?

Manx: Don’t be ridiculous, not at all. Now where were we?

Feral: Great! I can’t burn, cut or blast! What does he expect me to do? Leave it to the SWAT Kats?

Razor: What’s it take to stop these things!? That should buy me some time.

Callie: Are you okay? I hit you pretty hard.

Callie: I’m sorry. I thought you were one of them.

Enforcer Sergeant: Copter 1 is on approach from the chemical factory.

Feral: Good. We’ll try it the Mayor’s way. Let’s see how that cabbage likes a thousand gallons of weed killer! Drop payload on my command!

Feral: Is there no way to destroy these things?

T-Bone: Feral’s strikin’ out big time down there. Razor, what’s your status?

Razor: I’ve got Ms. Briggs. We’re in the ventilation shaft heading for the roof.

T-Bone: The roof? That’s a negative! Those critters won’t let me get close enough for pickup!

Razor: No time for that. Miss Briggs says Viper’s–

Callie: He’s growing a pod to destroy the city!

Razor: We’re gonna have to stop him from inside.

T-Bone: Well ya don’t have much time. from what I can see, that ugly thing is about ready to burst!

Razor: We’re on our way, big buddy! Out.

Callie: Am I just scared or is it freezing in here?

Razor: With what? I’ve got nothing left but grappling hooks!

Callie: Too bad we couldn’t freeze the whole building.

Razor: Hey, maybe we can! Come on! T-Bone, I think we found a way to stop Viper. But you’re gonna have to make a fast pickup at the space center.

Razor: Super rocket coolant. We’ll meet you on the roof in t-minus ten minutes. Out.

Callie: How can you be so sure we’ll make it in ten minutes?

Callie: You call this a shortcut?

Callie: I don’t know about this!

Razor: This is easy.

Flight Control: Turbokat, I say again, this is flight control, you are not cleared for this area. Over.

T-Bone: Understood, flight control. But I have an emergency situation here.

Flight Control: Explain the nature of your emergency. Over.

Technician #1: What’s that SWAT Kat want with a tank of super rocket coolant?

Technician #2: Who cares? If the front office wants to give freeze juice to a vigilante, who are we to argue?

Technician #1: Yeah, but that one barrel has enough coolant to freeze a whole city block!

Viper: It’s just you and me now, sweetness. Feral is helpless, and the SWAT Kats have run away in their stupid jet! Aww, you’re so beautiful! It’s going to be a shame to have you explode!

T-Bone: If anything’s happened to him, I’ll…

Razor: Thanks, and it still will be. I’ve been saving this for last! Hang on!

T-Bone: Time for some real flyin’! I owe it that much to Razor. Eat my backwash, you lettuceheads! Barbecued cabbage, my favorite! They’re tougher than I thought!

Razor: Don’t tell me your givin’ up!

Viper: The SWAT Kats have failed! In a few minutes, it will be all over!

Razor: You can say that again, snake-puss!

Viper: What?! It’s not possible!

Viper: You can’t stop me now! It’s oblivion for you, SWAT Kat!

Razor: Need a lift? Aww this is great! My weapons systems are all gummed up!

Razor: Yeah. Well, I’m gonna have to drop our freeze bomb by hand, if that flying produce doesn’t drop us, first! Wa-hoo! Get ready, Viper! The SWAT Kats are gonna put the big chill or your big plans! T-Bone, go for that big air conditioning unit on the roof!

Feral: Get clear! On the double!

Callie: Better drop me off, guys. I think the Mayor’s gonna need sedation.

Callie: Thanks! It was fun, w ehave to do it again sometime.

T-Bone: See you later, Miss Briggs, we have to get back. Razor has to water his plants.

Razor: Oh, no. I think I’ve had enough gardening for one day.

Young: Thank you for the golf game, but I think we will pass on your most generous offer.