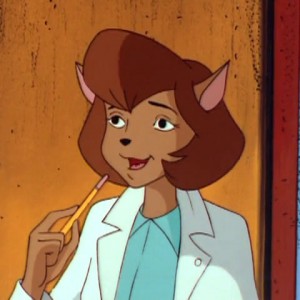 Only a sorcerer’s dark power could have brought these ancient bones to life. It must have been the Pastmaster.

Archaeologist and curator of the Megakat City Museum of History, Dr. Abby Sinian is the foremost expert on the supernatural in Megakat City. She has come into conflict with the Pastmaster on at least two occasions; first, when she and Callie Briggs just happened to be in his way when he broke into the museum searching for the Tome of Time, and again when he resurrected the Mummies of Katchu Pitchu.

"These inscriptions date back to the Dark Ages."

During the former event, Dr. Sinian was instrumental in pointing out that the Tome of Time was the source of the majority of the Pastmaster’s powers, a fact largely ignored by Commander Feral. In the second, she and Henson were endangered by the giant mummies, but rescued by the Swat Kats and Cybertron, and Sinian told the vigilantes to destroy the Headdress of Power in order to put an end to the mummies.

"Callie listen. I think I found out how to destroy the ghost pilot."

In-between her encounters with the Pastmaster, Dr. Sinian also proved quite helpful when the ghost of the Red Lynx came back from the dead and tried to kill Mayor Manx. Without her, the Swat Kats would’ve never learned that only a member of the Manx family could destroy the Red Lynx for good again.

In the unaired episode Succubus!, Dr. Sinian is consulted by Callie Briggs and Felina Feral about a string of gruesome murders which have been occurring in Megakat City, with victims turning up dead, drained of life. She tells the two about the legend of the evil succubus, before being attacked along with them by Katrina Moorkroft’s pet three-headed monster, which was released inside the museum by Katrina’s chauffeur Otto to silence the three she-kats. They are saved by the timely arrival of the SWAT Kats.

She’s a good support character. Sure she accidently brought back an evil, relentless spirit of a pilot. But hey, how the heck was she supposed to know he would return from Luna’s (moon’s) light shining in the cockpit of his plane. But we all know she made up for it, by researching how to send him back in to the underworld.

I really love the way Dr. Abby Sinian has been an extremely big help to the citizens of Megakat City, especially to Deputy Mayor Callie Briggs, The SWAT Kats T-Bone and Razor, and the Enforcers when she helped them of how to find the weak spots and destroy the villainous threats of The Pastmaster, The Red Lynx, and The Giant Mummies from the Great Pyramid of Katchu Picchu since she has a fine knowledge of researching anything that is mythological and supernatural but I know that she will be definitely surprised on learning the telekinetic abilities and the magical Native American animal spirits of the two new SWAT Kats Gaze and Wildstorm whenever she meets them and the other new members of T-Bone and Razor’s team.