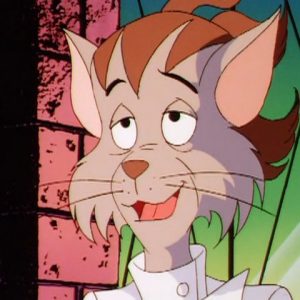 Just think of the benefit to katkind.

He and his colleague Dr. Elrod Purvis co-developed Viper Mutagen 368, which the noble Zyme hoped would be used to end world hunger and deforestation. However the greedy Purvis wanted to sell Viper Mutagen 368, and tried to steal the formula when Zyme left for home.

Zyme returned for his reading glasses, catching Purvis in the act. His attempt to prevent his colleague from escaping resulted in Purvis spilling the mutagen onto himself, mutating him into Dr. Viper. Viper took Zyme hostage along with Mayor Manx and Deputy Mayor Briggs, planning to mutate them into half kat, half snake creatures like himself, but they were saved by the SWAT Kats.

Some time after this, Dr. Zyme came into conflict with his former colleague a second time when Viper sent several giant bacteria monsters to raid Megakat Biochemical. Zyme attempted to use the strongest antibiotics known to katkind against the monsters, but because Viper had made his bacteria immune, this failed. Zyme was then apparently killed when one of the monsters tried to eat him.

It is not known what the first initial “N” stands for officially outside of its obvious pun usage.

Despite this, it appears as if the bacteria monster is distracted from eating him by Feral’s chopper in The Giant Bacteria, so his survival is possible, if unlikely.