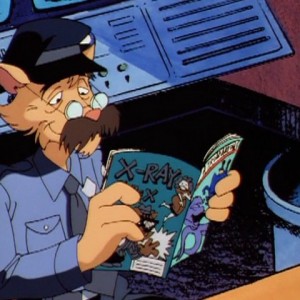 The elderly security guard up at the front lobby of Megakat Biochemical Labs. He enjoyed reading comics during his watch.

Emil would’ve appeared in the season two episode “The Doctors of Doom.” He would’ve been attacked by Dr. Harley Street and some Ci-Kat-A when they broke in to steal Super Katalyst S66.

In the script for The Origin of Dr. Viper, his name is Smitty, and he was originally supposed to accompany Commander Feral, the Enforcer Sergeant and a commando upstairs, where he would’ve been sprayed and paralyzed by the giant mosquitoes. However, he was cut from this sequence.