Warning: mysqli_query(): MySQL server has gone away in /home/felinaferal/public_html/subdomains/swatkats/wp/wp-includes/wp-db.php on line 1924 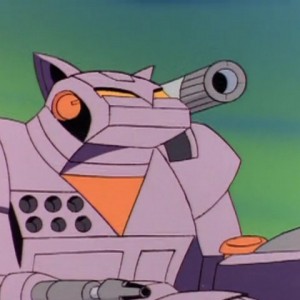 The taller of the two Macrobots designed by Professor Hackle. Purple in color, this giant robot built by Puma-Dyne was taken over by the severed head of Mac Mange. Puma-Dyne had armed it with a shoulder-mounted cannon. After Razor took over the other Macrobot, Prowler, Mac was joined in Goliath’s control center by Molly, and the Metallikats used it to fight against Razor in the other robot, climbing to the top of the Megakat Trade Towers. Razor put Prowler on autopilot, causing it to crash into Goliath, knocking both giant robots off of the roof, sending them crashing into a nearby park. The impact of the fall destroyed both Macrobots.