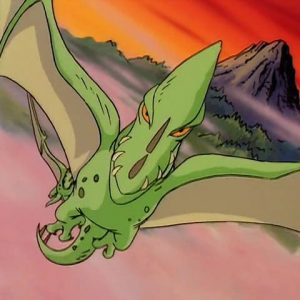 Affirmative, but now we have to show them! - Razor

Flying reptiles similar to pterodactyles who menaced the SWAT Kats after the Pastmaster’s time vortex sent them back in time to the days of the dinosaurs. Two, tied up using Spider Missiles, fell into a lake where they were set upon by a pair of plesiosaurs. The other two attempted to follow the SWAT Kats into a live volcano, but were overcome by the heat and fumes and fell into the molten lava.

Although they appear similar to the pterodactyls used in the same episode, there are several differences besides the name. The long-necks (as they’re called in the model sheets) have curved horns on their snouts, pronounced underbites, and, as their name implies, long necks, in addition to being far smaller than the pterodactyls.