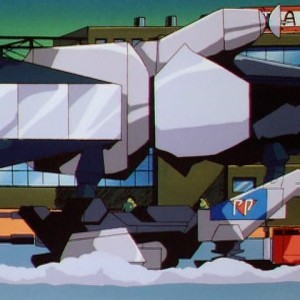 An extremely powerful laser satellite capable designed to stop earthquakes from orbit with “surgical precision” by using an intense heat beam to seal faultlines by melting them together. When fired it rendered destruction equivalent to a nuclear explosion. Zed assimilated this device and prepared to use it on Megakat City only to be stopped at the last moment by T-Bone.

In the unfinished episode Turmoil 2: The Revenge, Puma-Dyne would’ve cooperated with MASA to put the Mega-Beam into orbit, only for it to be remotely hijacked by Turmoil and used to attack Megakat City. She uses it to destroy both Megakat Tower and Old Megakat Bridge by melting them (resulting in a very different kind of destruction than when Zed used it). After Razor destroys her control over the satellite, it turns its power against Turmoil’s base, the Cloud Fortress, partially melting it before overloading and exploding in orbit.