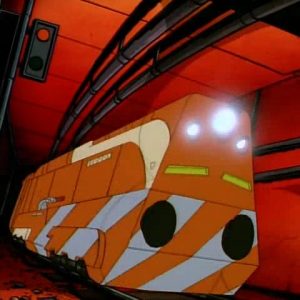 Subway trains are how some Megakat City citizens get around the city. A subway train on its morning commute was attacked by one of Dr. Viper’s bacteria monsters as it came into Katalina Station. Razor attempted to get there in time to avert disaster, but was too late, and the train, along with all of his passengers, was devoured by the creature.

In the unfinished episode The Doctors of Doom, Dr. Viper’s mutant grub worms would’ve tunneled through the subway to get to the Megakat Thermonuclear Plant, attacking a train in the process. One of them would’ve spit acid at the driver’s window.