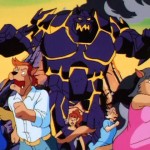 T-Bone> Mach 5, buddy! How are the new heat shields holdin’ up?

Razor> So far, so good. Uh oh. Better slow down. Sounds like those heat shields need another rivet job.

T-Bone> Roger that. Headin’ back to the hangar.

Young> And more important, there’s plenty of room for an adjoining golf course!

Manx> Right you are! Just sign here and the bulldozers can start digging. After all, the faster we begin, the faster we can tee off. [chuckles] Start ‘er up!

Islander> Stop that machine! It might break the Talisman Stone! The one that protects Anakata from Volcanus, the fire demon!

Manx> Why, that’s just superstitious hoo-doo nonsense! This is just an extinct volcano, and that is just an old stone that’s sitting in the way of progress.

Young> Mayor Manx! My associates and I feel that if this stone is part of island tradition, it should be carefully moved.

Manx> What? Oh! [chuckles] Whatever you say, Mr. Young. Hey! Keep away from that big stone!

Worker> What did you say, Mr. Mayor?

Manx> I said, keep away from that- Godfrey!!

Islander> [gasps] The Talisman Stone! Whatever happens now will be on your heads!

Manx> Eh, don’t worry about it. See, Mr. Young? Nothing’s happening. What did I tell you? It’s just islander mumbo-jumbo. Now, let’s back to- [gasps]

Islander> You fools! For a thousand years we’ve kept the demon Volcanus asleep! Now he will destroy us all!

Manx> Let’s get out of here!

Manx> See? What did I tell you? Nothing to worry about. The water’s put out the fire demon, yes.

Islander> Volcanus will not rest that easily.

Manx> Will you please be quiet?! [sighs] Now, when the smoke clears, I’ll send a new crew out to Anakata, Mr. Young. Your industrial park will proceed as planned.

Ann> Mayor Manx can you tell us exactly what’s been happening on Anakata Island?

Ann> If you’ve just joined us, this is Ann Gora of Kat’s Eye News, live at Megakat City docks, where a fire demon is wreaking havoc! Where are the Enforcers? Where are the SWAT Kats?

Jake> Yeah, it’ll punch a hole in just about anything. Whoa, looks like I’m missing a pretty cool horror flick. Oh, what a cheesy-looking monster! Oh that actor’s a dead ringer for Mayor Manx!

Jake> Looks like we got those heat-shields on just in time!

Feral> On my order, hit him with everything we’ve got. Now!

T-Bone> Nice save, Razor! Crud! I hope Feral can swim!

Feral> Maybe…but even they can’t stop that thing!

T-Bone> This creep’s just too hot to handle, Razor!

Enforcer Dispatch> Attention all units! The creature is headed for Megakat Nuclear Plant!

Ann> [gasps] If Volcanus hits that core with a fireball-

Feral> We’ll get total meltdown! Megakat City will explode like a volcano! This is Feral! I want Megakat Nuclear surrounded with every bit of heavy artillery you can muster!

T-Bone> Any other ideas, buddy, before flame-face turns Megakat City into a pile ‘a nuclear litter?

Razor> Maybe. Yeah, I think I see a weak spot. An electronic detonator might work, but I’m gonna have to get up close and personal to use it! Those clouds should gives us enough cover!

T-Bone> Razor, what if that heat-suit doesn’t hold? You’ll be flame-broiled!

Razor> Just keep lave-breath busy while I get the drop on him!

Razor> Ready to rock and roll, in t-minus ten seconds!

T-Bone> Razor get your tail outta there!

Razor> T-Bone, get away!

Manx> And I, Mayor Manx, do dedicate Anakata Island Park to the citizens of Megakat City, courtesy of Mr. Young and associates.

Young> It was a bad omen to build an industrial park here. A real park is much better.

Souvenier Guy> Get your souveniers here! Actual pieces of Volcanus!

Manx> Hehe, and the best part is I get twenty-five percent of everything they sell.

Chance> Looks like Anakata Island has become a real hot-spot, thanks to Mayor Manx, and ol’ Volcanus. Sure you don’t uh, want a piece of him for a souvenier, buddy?

Jake> Are you kiddin’? Just thinking about Volcanus makes me do a slow burn. [sighs]