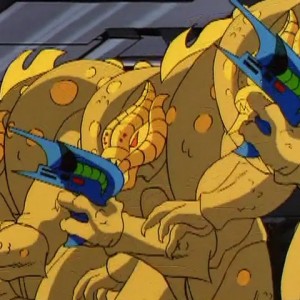 So much for your brave Aqueon allies! My guards will round them up presently. - Mutilor

Large alien brutes who followed the space pirate Mutilor’s orders. They served as guards aboard the stolen Aqueon water freighter. When T-Bone and Razor boarded the ship, they had to contend with dozens of these henchmen, but they ultimately defeated them all. Along with Traag the surviving henchmen were taken into custody by the Aqueons.